Athletic Directors are being hit with an epidemic called unplayable playing fields and it's running rampant throughout Western and Central Mass. Everyone's "itching" to get going with the spring season and mother-nature is not cooperating.

Ask Groton-Dunstable AD Mike McCaffrey how things are going. "It was a good week. We lost five more inches of snow."

Coaches have to be creative. Varsity baseball coach Matt LeBlanc and the team went to the Cape. "The trip was great because we were able to get on a field in Falmouth on Saturday and Sunday and had both a practice and scrimmage. The kids had a good experience," said LeBlanc. The baseball team will be indoors Monday thru Thursday practicing in the hitting cage again.

Varsity girls softball coach Derek Asadoorian followed in the gym at 4:30. "We did not make it to the Cape this year. I am worried that the first time we get out on the field will be our first game," said Asadoorian. The team practices from 4:30 until about 7 p.m.  The track/field and girls' tennis teams have done an amazing job clearing the snow off the tennis court and track. "We should be on the court Tuesday," commented tennis coach Laura Kaye.

"Did you see the track," said track coach Colleen Naboicheck. "The kids shoveled the whole oval!"

"We have been practicing at the middle school gym and at Tyngsboro Sports Center," said lacrosse coach Gary Kraemer. "The team was hoping to get the game against Westford Academy in because they have a turf field." No luck there!

A boys' lacrosse game scheduled for 3/27 at Cawley Stadium in Lowell, had been canceled.

"We are simply going to take it on a daily, weekly basis," said McCaffrey. "Weather looks like it might begin to cooperate, but we have not been able to access the playing fields. Once the snow melts, the fields need to dry so they can be lined.  Baseball, softball and golf are the biggest concerns early on and will most likely result in multiple rescheduled contests in the coming 2 weeks," he concluded. 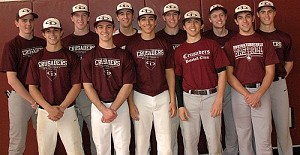