"The addition of the Unified Sports League to the GD athletics program this spring manifests this philosophy through its inherent inclusiveness and ultimate goal of providing lifelong learning experiences," stated Groton-Dunstable Athletic Director, Mike McCaffrey who initiated the Unified Sports program at GDRSD this year.

"The Crusaders athletics program has experienced many successful seasons throughout its storied history.  However, witnessing the unified athletes in action, was perhaps our finest hour and greatest athletic achievement ever," continued McCaffrey.

Unified Sports is an inclusive sports program. It brings together, as teammates, individuals with intellectual disabilities and those without disabilities, called unified student partners. They train, compete and socialize as equals.

United Sports philosophy focuses on training, competition and social inclusion (not simply participation). The program allows the opportunity to make real positive changes in lives of students with and without disabilities.

Teams consist of approximately equal numbers of Special Olympic athletes and partners. They compete under official NFHS Track & Field rules with some Special Olympics and Mid-Wach League modifications. The education based project is funded by the U.S. Department of Education.

In 2012-2013, twelve Mid-Wach teams participated in the second season for the Unified Sports Track & Field league. The program strives to help promote climates of dignity, respect, and inclusion in schools for all students.

School Teams that apply and are accepted will be awarded in the first year, $2,500 for equipment, transportation and resources. Upon successful completion the first year, the school will be granted preferential consideration for a second year $1,500 funding and by the third year funds will be self-sustaining and/or included in the athletic budget.

Team competition includes long jump, turbo javelin, shot put and the track competition comprised of 100M, 400M, 800M, 4 X 100 and 4 X 400. There are four regular meets throughout the season and then the championship. Competition between all athletes is extremely intense. 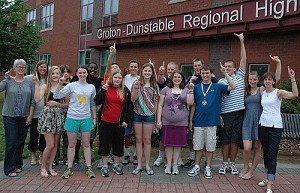