Lauren Kraemer and Liv Rubeski tallied three goals each and Livy Penny had two goals, including the game winner, to lead Groton-Dunstable past visiting Nashoba Regional, 12-10 in an exciting, back and forth Midland A girls lacrosse game.

The Crusaders (13-4) jumped out to a 4-1 advantage in the first 15 minutes on goals from Kraemer (2), Niki Wilkinson and Liv Rubeski. With GD on the attack, Penney blistered a shot past Nashoba goalkeeper Janice Bolton but it ricocheted off the cross bar.

Goals by hard working Rubeski and a free possession shot and finish by Wilkinson gave GD a 6-4 lead at the half. Despite losing seven of 11 draws in the first half, the Crusaders' defense, (Katie Judge, Becca Herlihy, Caroline Stark, keeper Maria Antonellis) was the difference.

The Chieftains (8-8) opened up the second half outscoring GD 4-1 and taking an 8-7 lead in the first 10 minutes. Less than a minute later, Penney ripped a shot past the Nashoba keeper to knot the game at eights.

Lead exchanges marked the next several minutes with Nashoba leading 9-8 with 13:29 remaining. Antonellis continued to make the big saves keeping GD in the game!

At 11:09, the Crusaders called time out. Coach Kraemer must have had a prophetic message for the team. With 11 minutes left, Emma Ordemann tied the game with a pretty assist from Wilkinson and Rubeski's third of the match gave the Crusaders a lead that they refused to surrender. Nashoba's Bolton never had a chance on Penney's shot at 4:14 with Ordemann potting the insurance score with under a minute remaining.

For the game, Nashoba dominated, winning 14 of the 22 draws between the teams but the tenacious GD defense and stout goaltending from Antonellis made the difference.

With the regular season winding down, the Lady C's got a huge game from Liv Rubeski who had three goals, including the game winner with 7 seconds left in double overtime to lead the visiting Crusaders (14-4, 8-3 Midland A) to an exciting 13-12 win over Westborough (4-11, 4-7).

"Another one for the history books," said girls lax Coach Kraemer.  "There were never more than two goals separating the two teams at any time. It was a back and forth battle the whole game."

The score was 7-7 at the half. Niki Wilkinson scored with seven minutes left pushing the Crusaders ahead, 12-11.  GD held onto that lead until a turnover gave Westborough an opportunity. The Rangers capitalized scoring the tying goal with 21 seconds left in regulation.

Both teams had scoring opportunities in overtime but it was Rubeski's goal on a free position shot with 7 seconds left in the second overtime that was the game winner.  GD ended the regular season Wednesday at Wachusett 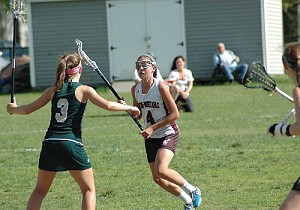