Gillette has been a physical education instructor in the Littleton School system for the past 11 years. He has coaching experience as varsity boys basketball coach in Littleton (4 years) and at the freshman/JV level at Groton-Dunstable since 2005.

"It is such a special feeling and an honor to come home and coach at the school I graduated from," commented Gillette. "I've worked with the kids that at the JV level who will be returning. They are a great group of young men and I am looking forward for the opportunity to teach them basketball, and hopefully some life lessons/skills.

"We really felt he would be a good fit for our varsity basketball program," commented GDRHS principal Michael Mastrullo. "Watching him instruct at the JV level, you could tell he cared about the kids."

At practice and during games, Gillette wanted the kids to know and understand their role on the basketball court. If a mistake was made, the explanation was repeated in a positive, constructive manner often followed with a friendly pat on the shoulder.

Gillette played basketball at Groton-Dunstable under former GD principal and coach, Bill McGuirk.  After graduation, he was on the Mount Wachusett Community college basketball team his freshman year before transferring to Salem State where he was red-shirted his sophomore year.

"Growing up, basketball kept me busy and involved. My mum was single parent. She was great and so supportive for me and my sister," said Gillette.

"Greg has an impressive knowledge of the game, giving me and the athletes a real comfort level," Mastrullo said. "The screening committee was also forthright in their remarks regarding his qualifications."

The comfort level transcends to the kids who feel comfortable with "G" as he is called. But they know, without being told, that there is a line.

"The athletic programs are a source of pride to the Groton and Dunstable communities. I hope to bring the same passion for GD basketball, where townspeople look forward to the basketball games and kids come and want to be part of the program," concluded Gillette. 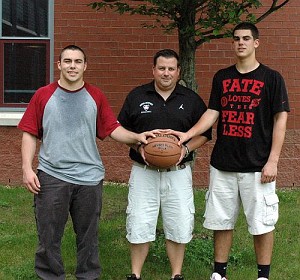