Algonquin sophomore Ryan Solomon allowed only three singles and juniors Mike Baker and Jack Henningson were both 2 for 3 with two and one RBI respectively to help lead the T-Hawks to a 6-0 shut-out over Groton-Dunstable (5-10) in league cross-over action.

Senior pitcher Brady McEvoy deserved better, allowing only one run with six strikeouts through five innings. "He has been pitching very well for us," said Coach Matt LeBlanc.

The Tomahawks (6-9) scored a run in the fourth on Baker's RBI single but McEvoy pitched out of further trouble stranding two runners with a pop-up to catcher Mike Keating and fly ball to right fielder Andrew Sinnery.

But it was the sixth inning when the visitors had consecutive hits, coupled with shoddy GD fielding, and plated five runs.

The Crusaders could do nothing with Solomon who retired the side in order in the fifth, sixth and seventh innings. There would be no "Bruins comeback" on Tuesday afternoon.

We didn't help Brady," commented LeBlanc. "Offensively we did not get it done."

The win extends the Algonquin streak to four in a row. Solomon was very efficient throwing just 78 pitches through his seven inning outing.

"We have started making the plays, getting good, timely hitting and solid defense," said coach Neil Burke referring to the T-Hawks late run.

Regarding the post season, Coach LeBlanc said, "We have two games with Fitchburg. If we sweep and then beat Hudson on 5/20 and Dracut 5/21, we can qualify." 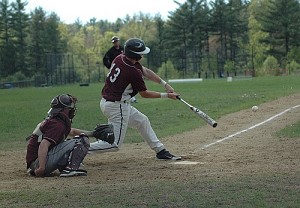