No. 1 seed Groton-Dunstable lost to second seeded Wachusett Regional 3-2 in a shootout in the Central Mass. Division 3 final played at the Kenneth W. Gaetz Arena (Wallace Civic Center). For Wachusett, their first C-Mass championship since 1971 when they defeated Auburn in the District 3 final.

GD got to the finals defeating Marlborough 5-2 in the semi-finals, the team that had handed the locals their only set back in the regular season.

Against Marlborough, GD led, 2-0 after one on goals Connor Maguire and Allan Haynes.

"All season long we have stressed staying away from penalties," said head coach Phil Rowley. Unfortunately Groton-Dunstable was called for eight, five in the second period and the Panthers capitalized getting scores by Erik Bastarache and Jake Chiasson, both on the power play. Despite outshooting Marlborough 29-5 in the second stanza, the teams were deadlocked 2-2 going into the third.

"We put ourselves in a terrible position by taking some stupid penalties," Rowley said. "It's unacceptable. I think we got a little complacent and didn't focus but managed to show our grit in the third period."

Goals in the final period from C J Kenny, Mike Keating and Nathan Rabbitt broke the game open for GD and the opportunity to move on against Wachusett.

But in the finals, the Crusaders could not quite get it done thanks in part to Mountaineers junior goalie Jake Strasser, who made 45 saves. "They outplayed and out shot us for most of the game," said Wachusett coach Matt Lane, "but Jake stopped everything we could ask him to stop."

GD took an early lead when CJ Kenny buried a shot past Strasser to the top corner, short side at 3:25 of the opening period with helpers from Justin Cole and Connor Maguire.

Wachusett answered at 6:25 when Marc Happy scored his 30th goal of the season with an assist from freshman Robbie Roche tying the game at 1-1. The goal came from the right side, just inside the blue line, between GD goalie Jason Robes' pad and the left post.

GD regained the lead , on senior Adam Kmetz's (assist: Brad Zadrony and Kip Strong) goal 17 seconds into the second but the Mountaineers came back, knotting the game at 2-2 at 8:37 on Marc Happy's second goal. (Assist: Colin Bennie)

Crusaders controlled play but both Strasser and Jason Robes pitched shut outs the rest of regulation and in the 12 minute sudden death overtime period.

CJ Kenny tallied the first goal for GD in the shootout with Robes making the stop on the first Mountaineer shooter. But GD was stoned the rest of the way while Wachusett got goals from junior Marc Happy, the puck rolling in after Robes made the initial stop and sophomore Brian Boulette. "It was exciting but I hate to see games decided on a shootout, "said Rowley.

"They (GD) deserved to win this game, they really did. I hate to say we're lucky getting out of here," continued Coach Lane.

Wachusett (17-3-2) will meet Westfield at the Wallace Center in a State Semifinal at 7:40 p.m. Thursday, 3/14. The Crusaders (17-2-4) beat both the Bombers and Mountaineers during the regular season. Groton-Dunstable, playing in their first year in Division 3, moved up after going 41-3-2 with two Central Mass. 3A championships and a state title the previous two seasons.

"I wish things came out differently, but they didn't," said Rowley, Groton-Dunstable's first-year coach. "We had our chances but couldn't finish. We didn't hold anything back. It was a hell of a hockey game. I am so proud of the team. Every player stepped up all season and the senior leadership was been outstanding." 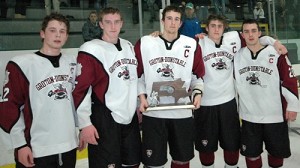