Romich and Rutledge Save Crusaders

Groton-Dunstable outscored visiting Hudson, 13-3 in OT to escape with a 63-53 win in a Division 2 first round game. Senior Kyle Romich (19 pts. 8 rebs.) knocked down two foul shots with seconds remaining to knot the score at 50-50 at the end of regulation. "Starting center Kenny (Rutledge), with 12 points and 15 rebounds, was huge for us, hitting some big shots and controlling the boards," praised Crusader coach Keith Woods.

Upsets seemed to be in vogue on Monday night with four, the biggest, No.2 Northbridge losing to No.15 Gardner, 61-52.

No.13 Hudson (10-10) against host No.4 Groton-Dunstable (15-7) looked like a mismatch on paper, but the Hawks proved to be more than the Crusaders bargained for.

"I think we took them a little lightly," said a relieved coach Woods. "Practice yesterday was a little less intense than I thought it should be going into a district game," he acknowledged. But Kyle willed us back."

The Hawks' Ryerson Ciesluk hit a three opening the first quarter and GD responded with an 11-0 run. I figured, time to go home and watch the Notre Dame/Connecticut women's basketball tilt. Wrong! After eight minutes, the Hawks had stormed back, trailed 17-15 and it was a battle the rest of the night.

If I didn't know better, it appeared to be a Hawks home game with red T-shirts everywhere and Hudsonian rhythmic coordinated cheers throughout the game. And the Hawks were feeding off the energy!

GD led 25-21 at the half but Jacob Loewen, scoring 13 of his game high 21 points in the third, had the Crusaders reeling.

Down by 10 late in the third, GD's Will Peregoy (15 pts.) made three the old fashioned way to cut into the Hudson lead.

Rutledge kept working on the boards with several offensive rebounds and key putbacks. But with 1:40 remaining, the advantage was still seven, 50-43, until Liam Barberich (11 pts.) stepped back and drained a humongous three followed by a Peregoy layup, setting up the Romich moment.

"Hats off to Hudson. They played their hearts out," Woods said.

"We have had tough losses but four comebacks this season and the team realizes we can win," said Hudson coach Mike Mercuri. "I told them before the game, great things can happen if you reject what seems impossible." Very prophetic, I thought. 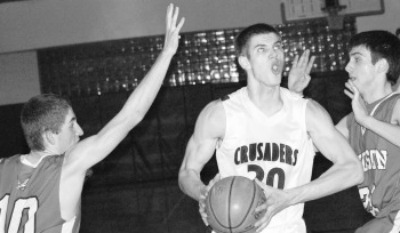 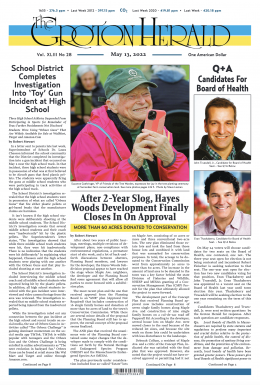