In MIAA Central Mass. Div. 2 quarterfinal Tournament action, host No. 4 Groton-Dunstable cruised their way to the semi-finals with an impressive 66-42 win over No. 12 Grafton (11-10). But in the semi-finals against Quabbin it was a very different story. I will start with the good stuff!

"We are at our best when we play our game, run the offense and execute good defense," said GD coach Keith Woods. "We can be a dangerous team."

The Crusaders jumped out to a 21-6 lead after the first quarter behind 12 first period points from senior Will Peregoy, who had a game high 23 points, and were never in trouble the rest of the night. Crusaders' had 19 field goals, including eight three-pointers, while the Indians managed 10 from the field, four from beyond the arch.

"Great effort by our seniors and the bench," continued Woods. "Brad (Urspring), Chris (McKinney), they all played hard for 32 minutes. Our seniors were not going to be denied."

You are not supposed to beat a good team three times but the Panthers (20-3) either did not read the book or refused to accept the theory and gave Groton-Dunstable (16-8) a 56-42 drubbing in the MIAA Division 2 Central semi-finals at Worcester Polytechnic Institute on Sunday night.

"Our defense got us a good start and our offense, with Adam (Majer) and MJ (Briggs) hitting those threes early helped to get us ahead 17-2 after the first quarter," said Quabbin coach Dennis Dextradeur. "And Christian hadn't been involved in the offense. It was nice seeing others getting involved," Senior guard Christian Horton is the fourth leading scorer in the Mid-Wach Division, averaging 18.1 points per game.

With less than a minute played, Colby Milton (7 pts.) and Joe Reed (9 pts.) scored Quabbin's first two baskets but GD senior Will Peregoy's (9 pts) turn-a-round jump shot cut the Panthers' lead in half with 6:06 left in the first period. We'll be ok, I thought. Wrong!

"It was a terrible start for us. I don't know why," said Crusaders coach Keith Woods. "I thought we were prepared, ready, but I guess we weren't. It's a tough hole to dig out of."

With a 12-0 Panthers run with 3:35 remaining in the first period, I sensed trouble for GD. Top-seeded Quabbin kept firing and hitting, eventually taking a 19-2 advantage. Dextradeur kept subbing keeping his everyone fresh and received scoring from eight players during the stretch.

The Crusaders trailed 24-7 midway through the second but went on a 9-2 run led by senior Aaron Honkonen's eight points and closed the deficit to a more manageable 26-16 at the half. "We showed some heart," said Woods "but it was tough to come back against them."

After the break, GD hung around, closing the gap to seven points on two occasions the last, 47-39 with 1:26 remaining. But Horton (20 pts.) went coast-to-coast, finished, was fouled and converted.

Senior Kyle Romich (7 pts.) and Liam Barberich (9 pts.) were kept under control. "They shut down our scorers," Woods said after the game.

Groton-Dunstable was outrebounded 43-22 and that pretty much says it all. "Rebounding was key," said Quabbin's Horton. "We knew they were very aggressive on the boards so we had to take that away from them."

"We gave them no transition points," Dextradeur continued. "If we were going to have success, we had to get them to play a slow down, half court game."

"Out-hustled, out-quicked. They are a very good team," concluded Woods. 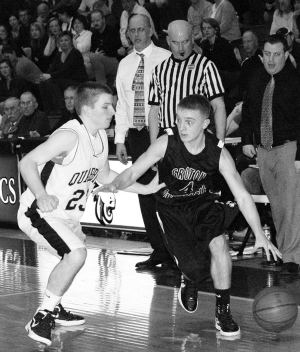