"Do you remember 1960 when the United States Olympic Hockey team beat the Russians?" selectmen Jack Petropoulos asked me. Canada, the Soviet Union, Czechoslovakia and Sweden were the top four teams heading into the Games. All four were defeated by the American team. For the United States, the victory has come to be known as the "Forgotten Miracle".

Petropoulos continued, "The country was so supportive and excited with such apprehension for each contest leading to that final game. These current students were not around for that event but the recent accomplishment by Rachael McCarron and her teammates had the same anticipation and expectancy for me and I'm sure, many others. Every member of the team had a role in helping her score her 1,000th career point, a feat achieved only one other time (by a girl) in the history of the school."

With much of the student body, faculty and principal Mike Mastrullo in attendance at a special ceremony last Friday morning, Petropoulos stated "the Groton-Dunstable Regional High School Girls' Basketball team showed in many ways, including the inscriptions on their biceps, to the joy in that 1,000th point, an example to us all of what it really means to be a team. Few points are ever scored without an assist and that had much to do with the success of this accomplishment."

"Groton-Dunstable varsity coach Mark Hennelly and assistant Coach Jon Conlon have helped to show that the desire and skills of working together as a team are the products of, not only great coaching, but of the support of parents, teachers, friends and mentors," continued Petropoulos.

"Let March 15 mark the accomplishment, not only of Rachel McCarron's wonderful personal achievement; but also the contribution that her team, her classmates and the individuals that have influenced its members, have made to our community," Petropoulos said.

Petropoulos read the official proclamation: "Therefore, be it considered that we, Stuart M. Schulman, Peter S. Cunningham, John G. Petropoulos, Joshua A. Degen and Anna Eliot the Board of Selectmen of Groton, Commonwealth of Massachusetts proclaim March 15, 2013, Groton-Dunstable Regional High School Girls' Basketball Day. We urge all citizens of the Town of Groton, together with their family and friends, to join us in appreciating Groton-Dunstable Regional High School Girls' Basketball Team for faithful Service so willingly provided." 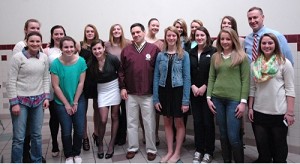