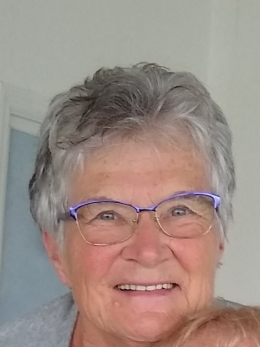 Sheila (Townsend) Lawrence-Wyman, 75, of Groton passed away peacefully after a period of declining health on Friday, Janu- ary 29, 2021 at Gulfside Hospice Center in Zephyrhills, FL, a town where she and her husband of 27 years, James “Skeeter” Wyman, Jr., happily spent their winters for the past 16 years.
She was born in Pepperell on April 28, 1945, the daughter of the late Evelyn (Marshall) Townsend and Seymour Townsend. Sheila and her siblings grew up on the family farm in Pepperell. She moved to Groton in the early ‘60s.
Sheila’s life’s work was operating a daycare center for 35 years in Groton, well known as “Auntie’s Place,” from 1969 to 2004, where “Auntie” lovingly yet firmly became a second mother to many, many children of parents in the Groton area who were very blessed and grateful to have her caring for their children. Not only was her daycare much sought after by parents because of the extraordinary care, kindness and nurturing that she provided, but also her home just happened to be located within walking distance of our local schools. Sheila adored her day-care kids and raised them as if they were her own, impacting their early years with love and respect, compassion and patience. Each of them, having been provided such a strong foundation, have now grown up to be empathetic, caring adults and great parents themselves, for which all the parents and the Auntie kids throughout her 35 years of care will be forever grateful for her loving dedication to them.
Sheila is survived by two of her five siblings: Marion Charpentier of Front Royal, VA; and Kathy Rossbach of Townsend. She is survived by three daughters: Rhonda Piper and her husband James of Ashby; Bonnie Magdelain and her husband Richard “Stocky” of Tigard, OR; and Wendy Lawence and her significant other Phil of Shirley. She also leaves behind three step children: Kara Gillie, Shane Wyman and David Wyman; three grandchildren: Bradon and Haleigh Magdelain, and Zakkary Piper; 10 grand step-children and two great grand step-children.
She joins in heaven her parents, her siblings “GeeGee” Forest, Bill Townsend and Jean Patten, as well as her two step-children Mark Wyman and Chad Wyman.
Memorial services will be held at a later date.