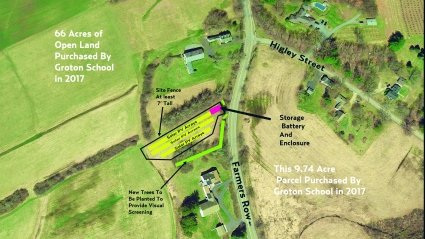 This graphic was created from engineering rendering. Graphics were added by eye to show close but approximate location of battery, fencing and solar array.

The Groton School will install a solar array and large storage battery on the northern portion of its 45-acre property at 182 Farmers Row. [see map page 3] The solar array itself is fairly modest. The biggest ‘bang for the buck’ comes not from the solar array but from the School’s installation of a one- megawatt storage battery at the site [a megawatt is 1 million watts]. The battery is the key factor in an agreement between GELD and the school leading to significant savings for both GELD and the Groton School.

The agreement allows GELD to manage the battery, releasing energy at times of peak demand, thus allowing GELD to reduce its peak power costs, the most expensive power it purchases. The agreement between Groton School and GELD shares these peak-power savings.

As GELD reduces its overall costs, Groton School will pay a lower rate for electricity year-round. Kevin Kelly, GELD manager, describes the agreement as a win-win for both institutions. Fortuitously, most of GELD’s peak power costs are incurred on hot days during the summer when electricity use for air conditioning skyrockets; the very period that Groton School is on hiatus from its regular school calendar and their power needs are very low, thus allowing their storage battery to be deployed by GELD to reduce peak power demand on the hottest days of the summer.

During the regular school year, the battery will further reduce electric costs by allowing Groton School to do some ‘cost-shifting.’ The school plans to charge the battery at night when power costs are lowest and consume the stored power during daylight hours when electricity costs are higher. In theory, this is a great idea. But for GELD, the challenge to make the plan work is to understand the true cost of power being sold at different times of the day so that a fair and profitable price can be charged. Without knowing the true hourly cost of power, it is conceivable that GELD could sell power to Groton School below cost so GELD could unintentionally be subsidizing the School.

Calculating GELD’s hourly costs for power is a challenge because there are so many varying factors that change continually. Calculating such hour-by-hour costs would seem like an almost insurmountable barrier for a small municipal light department like Groton Electric. But GELD is fortunate to count Bruce Easom as one of its three elected commissioners. Bruce, who holds an engineering PhD from MIT, wrote a program calculating hourly costs from a variety of data sources. GELD manager Kevin Kelly said that writing such a program was no small task. He said, “Bruce created an incredible program. I’m putting some of the last data inputs into it right now. It’s awesome having a commissioner with his talent. Now we can calculate our costs on an hourly basis.”

With the cost figures in hand, GELD is now able to charge the Groton School a price for overnight power that offers significant savings while still being profitable – a true ‘win-win.’

Asked whether GELD would install its own storage batteries in the future, GELD Manager Kelly said that experience with the Groton School battery would provide GELD invaluable know-how managing  storage batteries for maximum advantage and help them decide when to make such an investment. He said that large, stationary, storage battery technology is advancing rapidly. One promising technology being pursued by multiple developers is the liquid metal storage battery, a battery that promises very long life and almost infinite storage cycles.  He said that he could see GELD installing batteries when there is at least a seven-year payback on the technology.

Kelly said that the installation of a large storage battery put Groton School at the leading edge of a technology capable of capturing, storing and distributing carbon-free power. In Groton high-capacity storage batteries are much more effective in advancing the goal of distributing carbon-free power than solar arrays alone because so much of Groton’s power is already carbon free and costs only 13 cents per kw with the early pay discount, whereas power costs 25 cents per kwh in towns like Andover and include much more carbon. So while solar collection arrays are much more economically viable in Andover where electric rates are double Groton’s, storage battery technology offers the greatest impact here. This installation of storage battery technology will make Groton School the only prep school, so far, showing leadership with this important cutting-edge clean-energy technology.