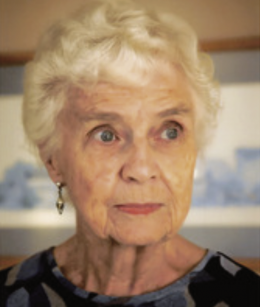 Ruth Johnson passed away on Wednesday, December 21, 2022.  She was born August 8, 1933 in Norwood, daughter of Frank and Ruth (Sawyer) Tolman.

Ruth spent her early life in Westwood and was an active athlete in high school. Her basketball prowess earned her recognition by the Booster Club and she was inducted into the school’s Hall of Fame. After graduation, Ruth was employed by the John Hancock Insurance Company in Boston.

In 1953, she married her high school sweetheart, Norman Johnson. The family moved to Groton in 1959 where she became very active in community affairs. Ruth was a Cub Scout den mother, a Sunday school teacher, choir member and secretary of the Union Congregational Church.  She was a member of the Groton Woman's Club and the DAR.  Ruth donated hundreds of hours as a buyer and co-chair of the Nashoba Community Hospital auxiliary gift shop, raising money for hospital equipment.

Ruth loved her flower gardens and dared a weed to grow in them!  She was a terrific wife, mother, friend, volunteer, and was hostess for many gatherings at her home.  After residing in Groton for more than 50 years, she relocated to Delray Beach, Florida with her late husband, taking up the game of golf which she enjoyed.

Ruth leaves four children, Norman Jr. (Skip) and his friend Diane of Delray Beach, FL; Bruce and his wife Dorothy of Socorro, NM; Jeffrey and his wife Susan of West Linn, OR; and Nancy Henn and her friend Bill of Groton; three grandsons, Chad, Kyle and his wife Brianna Johnson and Walter Henn; and her sister, Jeanne and her husband Peter Beguerie.

Ruth was interred with her husband, Norman, at the South Florida National Cemetery.