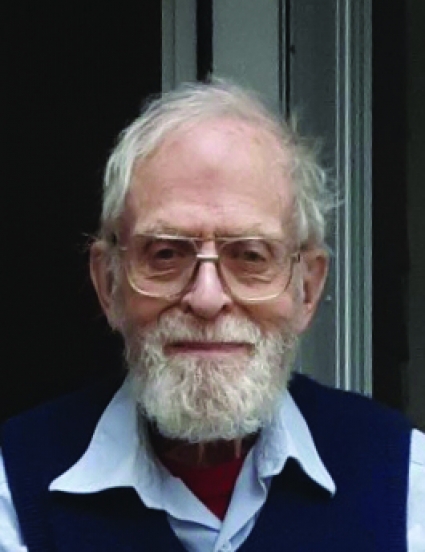 December 8, 2020 marks the day our dear father and friend Donald Stoops, age 96, fell asleep in death at home. Though restrictions prevented all eight of his children from being with him, his son Glen and dearest Nancy were by his side at his home. Don was born and raised in the mid-west, spending most of his boyhood in his father’s hometown of Nappanee, Indiana, where his mother had been the first librarian. Having lost his mother in early childhood, he and his brother Ward spent many of their younger years with an aunt and uncle who were dear to all of us.
His fascination since very young was flight and airplanes. All recall how he could point out a plane and tell us everything about it! His enlistment in the army during WWII took him to Okinawa (of which he seldom spoke) resulting in his quiet determination not to support war.
He met his sweetheart Nancy (Monk) at Antioch College, marrying in 1947. With one daughter they headed west with a homemade house trailer behind a ‘32 Buick, settling in the Puget Sound area where he taught school on the Lummi Reservation. With an Education degree from Western Washington State and three more daughters and a son, they moved to the Willamette Valley of Oregon where he was a metallurgical engineer for the Bureau of Mines. There he was part of ground- breaking research on titanium for the space program. Two sons lat- er he went back to teaching, re- locating in SE Washington where he was the teaching principal, janitor, and bus driver at Colum- bia, a two room, 8-grade school. A daughter born there turned one year old in Vermont where he was the mechanical drawing teacher at Rutland Jr. High. Next move to Massachusetts, after teaching one year at Littleton High School, he found his niche teaching shop, working with young people with disabilities, eventually at Perkins School for the Blind. His years there made lasting impressions on us all.
Living in southern New Hamp- shire for two decades in the 1980’s and 90’s, he enjoyed the beautiful places surrounding Mt. Monadnock, and worked for local machine shops in the Peterbor- ough area until retirement. This gave him time to pursue his pas- sion for flying, getting his pilot’s license at age 70. (But gliders and hang gliders were the ultimate, in his view!) An annual trip to vol- unteer at the Oshkosh, Wiscon- sin EAA Fly-In prompted a move
Obituary
there until returning to Groton in 2008.
Residing in Groton with Nancy in her childhood home, with fre- quent visits from the many off- spring and families, has brought him obvious joy! Until recently he had been a familiar figure as he and our Mom did daily walks in a course around the schools nearby.
Predeceased by both parents, two brothers and a sister, and two sons-in-law, Jonathan Chor- lian and Ron Ober, he is sur- vived by a brother and his wife, Dr. Ward and Anne Stoops of New Hampshire, and a sister and her husband, Judy and Chuck Dibble also of New Hampshire. Don and Nancy’s children: Mar- tha (and Bob) Letasz of Maine,
Dorothy (and Peter) Mason of New Hampshire, Al Stoops of New Hampshire, Mary Ober of Ohio, Evelyn (and Bob) Jordan of Maine, Glen (and Irene) Stoops of Oregon, James (and Andrea) Stoops of Maine, and Marji (and Jeff ) McMillan of California are all missing him already as are the multitudes of grand and great- grandchildren.
As we ponder how our Dad in- fluenced us, we are grateful for things instilled from early child- hood such as seeking content- ment with simple enjoyable ac- tivities, respect and dignity for all people and the environment, honesty, good manners and be- ing resourceful. We fondly recall more than one opportunity when he used his “Macgyver” ingenuity to get his family out of a scrape! Music was woven into our days with singing as we worked, trav- eled, or practiced an instrument. Singing was a pleasure he enjoyed even as his strength ebbed these past few months, always ready to join in a song. Though we ap- peared a posse as we swarmed out of the station wagon (along with the dog), he treated us, as one son describes as “pieces of eight,” precious individually. We will treasure always the memory of his ready smile and shy ec- centric ways; we hope to carry on
in ourselves, and pass on to our children, the positive qualities we observed and learned from him.
Though monetary donations in his name to the following or- ganizations would please him, a fitting tribute would be to pause, take your binoculars (we can hear him saying “hold them carefully, they can break!”) and watch the flight of a hawk high over the treetops, then hand them to the person next to you so they get a turn.
Perkins School for the Blind 175 North Beacon Street Watertown, MA 02472
Or
Nashua River Watershed Association
592 Main Street
Groton, MA 01450-1230
The Family of Don Stoops would like to gratefully ac- knowledge and express our appreciation for the invaluably kind guidance and assistance given us through Care Dimensions Hospice over these past many months.
Comment Policy:
Please send comments to grotonherald@gmail.com