Q&A with Robert L. Collins - Implications of the Master Plan

HERALD: Most people are unclear as to what a Master Plan actually is, and its significance to the community. Could you give us an overview of the Master Plan?

ROBERT COLLINS: A Master Plan is essentially a statement of purpose, which sets forth the goals and policies of the town as to growth and development. Master Pans are required by Chapter 41 of the General Laws. The statute requires that these be updated from time to time, and that this be done through an interactive public process through which community values and goals are identified, and provisions are set forth which would meet those goals and values.

HERALD: Is there any statutory requirement that a Master Plan must be completed or renewed within a set time period?

ROBERT COLLINS: No. It simply needs to be updated as the Planning Board sees fit. There is not fixed time interval or statutory requirement.

HERALD: Is there any requirement that a town's bylaws be reflected in the Master Plan?

ROBERT COLLINS: There is no statutory requirement that bylaws be consistent with the Master Plan. The thoughts and conclusions set out in the Master Plan are not bylaws - they are simply ideas toward which the community may seek to move towards.

HERALD: If a Town Official argues that an idea should be voted on favorably because it is 'in the Master Plan', is there a legal or statutory basis for such an argument?

ROBERT COLLINS: No. One often hears public officials touting the Master Plan, especially at Town Meeting, when attempting to convince voters to vote in favor of a certain proposal, but this falls into the realm of a 'selling' or 'persuading', rather than a statement of legal significance. HERALD: So, if a Master Plan, is really just a general statement of goals and values, does it matter whether or not Town Meeting votes to ratify it?

ROBERT COLLINS: Yes it does matter. The Courts have looked at Master Plans in attempting to construe the meaning of ambiguous bylaw or regulation provisions, so the thoughts and ideas expressed in the Master Plan are not to be taken lightly. It is thus important that any specific policy recommendations that are glaringly inconsistent with what we now have on the books, be portrayed as ideas which may wish to be explored rather than policy goals, unless it is very clear that the town wishes to move in the direction of those policy recommendations.

HERALD: So, can the Courts use the Master Plan in ruling on Groton's zoning?

ROBERT COLLINS: Yes. While there is no statutory requirement that zoning be consistent with the Master Plan, the Courts have used provisions in Master Plans as a basis on which to approve contested zoning changes. Thus, to an extent, it becomes somewhat easier to make changes in zoning provisions, or changes to the zoning map if the ideas which motivated those changes have been expressed in the Master Plan. In addition, there are instances where the Courts have utilized the lack of consistency within a Master Plan, or the failure to analyze the degree to which a proposed change is consistent with it, as a reason to strike down a change in zoning. HERALD: So, although the vote at Town Meeting to ratify is considered to be non-binding in a legal sense, we still need to be wary when ratifying a Master Plan, if it not consistent with the values expressed in our zoning bylaws.

ROBERT COLLINS: That is a fair statement. As a community we need to be mindful that seemingly innocuous and well intentioned goals set forth in the Master Plan can come back to haunt us if the potential ramifications of them are not carefully considered.

HERALD: The Master Plan concludes that Groton's bylaws are 'land consumptive'. Do you agree with this characterization?

ROBERT COLLINS: One has to wonder what the consultants looked at in making this determination. While it is true that our residential zoning stipulates a density of two acres per unit, almost all of the development which has occurred over the last thirty years has utilized the Special Permit variant allowed under our bylaw, which does not have a minimum lot size requirement. This has allowed for the creation of significant swaths of public land throughout town. I do not feel we deserve being labeled as land consumptive or inefficient in fostering that type of land use.

HERALD: So, in your opinion, do Groton's bylaws do a decent job of balancing land use and environmental regulation?

ROBERT COLLINS: Lot sizes are driven as much by Title 5 as by zoning. Absent municipal water and sewer systems, the offset and nitrogen loading requirements under Title 5 require a one acre lot for a four bedroom house. To suggest that we need to encourage greater density or smaller lots does not take notice of the fact that we do not have the infrastructure to support such a requirement.

HERALD: There is a suggestion that Groton's bylaws are a significant restraint on business development. Do you think this is true?

ROBERT COLLINS: The section of the Master Plan dealing with economic development states that a major constraint on business growth is a lack of appropriately zoned land. I assume this means that we should be zoning more properties as B-1. This is an odd conclusion, in my mind, given the amount of existing vacant or un-built commercial property we now have.

HERALD: On Pages 126 and 127 of the draft Master Plan, there is a long discussion of the supposed anti-business bias of the town. Do you think this is true?

ROBERT COLLINS: The facts do not support this conclusion. Of all the Site Plan Review submissions over the last three years, there has not been a single disapproval. I have assisted with the approvals of most of the new construction associated with commercial development in this town over the last 25 years, and I have not found the permitting process to be confusing as stated on page 126, nor have I felt an anti- business bias on the part of the boards involved.

HERALD: Are there any other areas related to commercial and business development that you find a significant break from the thrust of our current zoning bylaws?

ROBERT COLLINS: Well, there are statements in the Master Plan, which I find incorrect and therefore, troubling. For example, on page 127 it is suggested that "the fragmented geography of existing commercial and manufacturing districts" is a problem. According to the draft Master Plan [page 129], this can be corrected by expanding these districts - if this policy goal were to be implemented, Route 119 would resemble Route 110 in Westford or Route 2A in Acton. In my view, this is not the result most residents would want.

HERALD: It has been widely reported that the draft Master Plan recommends higher density development in the so-called 'village' areas. In you view, does this make sense?

ROBERT COLLINS: Page 83 deals with encouraging higher density in the "village areas" - The Center, West Groton, Lost Lake, and the Four Corners area. I am not certain where we would fit higher density in the Center; the area has significant wetlands on either side. If this idea means encouraging additional development on some of the existing larger lots in the Center, I question if there is the political will to add housing density in these areas. West Groton and Lost Lake are both very dense now - each of these areas have sewerage problems due to high density, so I am not certain what would be accomplished by encouraging greater density - other than making the problem worse.

HERALD: One of the goals of the Master Plan is the vague goal of 'promoting sociodiversity". Might Groton might have a legal responsibility in this area.

ROBERT COLLINS: On page 107 there is a policy goal: "[to] Promote racial, ethnic, and cultural diversity. Groton should ensure that the sale or rental of affordable housing complies with federal and state civil rights laws and regulations." I don't think we have a problem in that regard, but someone reading this document who is not familiar with this community could conclude that we do by virtue of the inclusion of that statement. This would be unfortunate especially given the town's affordable housing initiatives.

HERALD: Do you have any general comments about this draft Master Plan?

ROBERT COLLINS: A great deal of work has gone into this document, and it contains an enormous amount of useful statistical information. But, many of the policy goals give me pause, and do not seem reflective of the Groton I thought I knew. 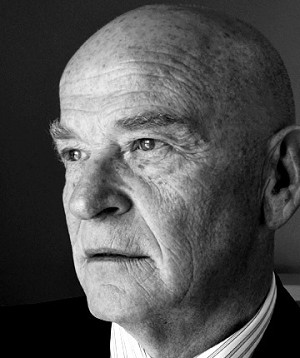 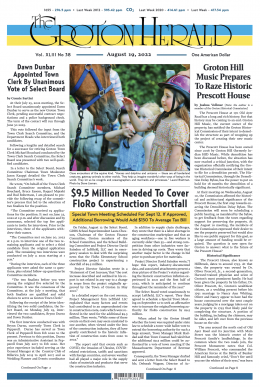