Only Breed of Wildcats Left in State, Bobcat Population Surges In Groton

Reported sightings of bobcats in Groton have been increasing recently, and according to Dept. of Public Works Director Tom Delaney these wildcats have actually been increasing in numbers over the last five or six years. "We now have breeding pairs, " Delaney said, and pointed out one sighting occurred last year where a pair and their young were seen on the backside of Gibbet Hill, off Martins Pond Road. "With breeding pairs, we can expect to see more visible activity from these animals," he said.

Recently Delaney was at Surrenden Farm and saw a good-sized animal sun bathing in the crook of a tall pine tree. When the animal came down, it turned out to be a bobcat. Other areas of recently reported sightings include the Wharton Row/town forest area, Canterbury Lane area, and Old Dunstable Road. Delaney added that one resident using a wildlife camera, recorded a bobcat chasing a coyote last year.

Old Ayer Road residents Ned and Liz O'Neill captured some striking photos of a bobcat in their backyard, stalking and then dining on a wild turkey.

The following information came from the Mass Wildlife- Division of Fisheries and Wildlife website. The only wild cat now found in Massachusetts, the bobcat (Lynx rufus) is a medium-sized feline approximately twice the size of a domestic house cat. The bobcat can be easily identified by its short, "bobbed" tail (3.5-7.5 inches), prominent face ruff, and slightly tufted ears. The coat of short, dense fur can vary in color from a yellowish to reddish brown with distinct or faint black spots along its flanks and white under parts that are also spotted with black. In summer their fur tends to be shorter and more reddish in color becoming longer and much paler in the winter, although there can be much variation in color among individual animals. Adult bobcats weigh between 15 and 35 pounds and measure 28-47 inches in overall length. Size varies depending on sex with male bobcats being approximately 33 percent larger than their female counterparts. Bobcat tracks sometimes may be confused with tracks of domestic housecats although adult bobcat prints are much larger than those left by a wandering housecat. Bobcat tracks have four toes in the front and back although the front foot actually has five toes. The fifth toe is raised high on the forefeet so it does not leave an impression when it walks. The claws also do not leave an impression as they are usually retracted.

Bobcats breed from February through March. They are polygamous and do not form lasting pair bonds. The young are born after a 62-day gestation period sometime in April or May. Female bobcats produce one litter each year consisting of one-four kittens, with an average litter size of two. The female is the exclusive provider. Male bobcats do not participate in raising the young. Kittens are born in a den lined with dried grass, leaves, moss, and other soft vegetation that the female scrapes into the den. Dens are located in rock crevices, under rocky ledges, in caves, in brush piles, or in hollow trees, stumps, or logs. Females may use the same den sites for several years in a row.

At birth kittens are blind and helpless but have already developed a thick coat of spotted fur. The female nurses the kittens until they reach two months. At one month the young begin taking solid food and venturing from the den. The young remain with the adult female until they are full-grown, usually through their first fall or winter. Bobcats live an average of 12 years in the wild and females continue to produce one litter per year until death. Although some young fall prey to owls, coyotes, and adult male bobcats, the number one mortality factor affecting the survival of both kittens and juvenile bobcats is related to food abundance.

Bobcats are shy, solitary, and generally elusive animals. Although they are generally silent, bobcats have a large repertoire of noises that they can produce. When confronted by an enemy, a bobcat may scowl, snarl, and spit, during the breeding season they may also be heard screaming from time to time. Bobcats maintain well defined home ranges that vary in size depending on prey abundance, season, climate, and the sex of the individual. Male bobcats maintain larger home ranges than females and it is not uncommon for individual animals to travel up to four miles daily. Both male and female bobcats use scent marking to mark well used trails and den sites. Their use of scent is thought to help individual animals avoid direct contact with each other as they move within their home ranges. Bobcats can be active day or night but tend to exhibit activity at dawn and dusk. Their activity peaks three hours before sunset until midnight and again between one hour before and four hours after sunrise. They remain active year round and do not hibernate.

Bobcats are proficient climbers and will climb trees to rest, chase prey, or escape from predators (chiefly domestic dogs). Like domestic cats, bobcats try to avoid water whenever possible but when forced to flee to water they can swim quite well. Bobcats are well adapted to a wide variety of habitat types. They can be found using mountainous areas with rocky ledges, hardwood forests, swamps, bogs, and brushy areas close to fields. Bobcats are well capable of dealing with human influences but tend to avoid areas with extensive agriculturally cleared lands that eliminate other habitat types. Bobcats can be classified as common in central and western Massachusetts, present in northeastern Massachusetts, and rare to absent in southeastern Massachusetts. It is thought that one of the limiting factors to bobcat expansion is the absence of suitable rocky ledges that provide cover and den sites in certain areas of the state.

Bobcats are classified as carnivores. They hunt by stalking (creeping from cover to cover) prey until they are close enough to pounce or they may wait on a trail or in a tree to ambush prey as it passes by, they may also run down their prey over short distances. Although bobcats have a fairly good sense of smell, they rely primarily on their keen eyesight and hearing to detect both prey and danger. They most commonly prey on medium sized animals such as rabbits and hares but will eat mice, squirrels, skunk, opossum, muskrat, birds, snakes, and other available items. Occasionally bobcats will prey upon larger animals such as deer but this is generally when other food items are scarce and only sick, injured, young or very old animals are likely to be killed. When food is plentiful, bobcats will cache the excess by covering it with leaves, grass or snow and return to feed off of it repeatedly.

In the past the bobcat was viewed as both a varmint and predator. Until 1968 it was legal to hunt bobcat year round and a bounty was paid to anyone harvesting a bobcat. In 1969 Massachusetts was the first state in the northeast to reclassify the bobcat as a game animal for which a regulated hunting season was established in 1971. Bobcats are an important natural resource in Massachusetts and are classified as a furbearer species for which an established trapping and hunting season and management program exists. Recent studies in New England indicate that bobcat populations have been rising. Compared to many other wildlife species bobcats rarely cause conflicts with human activities.

The hunting of bobcats is permitted in western and part of central Massachusetts. It is not permitted in eastern or southeastern part of the state. 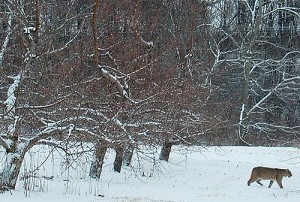