There was a buzz of excitement and anticipation in the standing-room only High School theater waiting for the appearance of Steve Kornacki, a graduate of Groton-Dunstable; a man, who 16 years ago must have felt like many of the young people in the audience Wednesday; a man who has achieved remarkable success as a national political analyst, pundit and talk show host on MSNBC.

Steve Kornacki began his remarks with a self-deprecating, humorous and poignant account of his journey on the road to hosting his own show. He attended Boston University after high school, majoring in journalism and minoring in history. In hindsight, Kornacki said, his classes in history and other liberal arts disciplines proved to be the greatest value to his future as a journalist and recommended that anyone wishing to pursue such a path focus on 'learning to improve the ability to think and analyze' through liberal arts courses, emphasizing that 'there is a huge premium on specialized areas of knowledge' and that 'learning how to learn' provides the foundation for absorbing and understanding new areas of specialized knowledge.

After completing college, he decided to move with friends to Los Angles with a great idea: making a living as a professional game show contestant. Laughing, at the absurdity of the notion, he said that he actually qualified for a new game show where the wining prize was $5,000. Unfortunately, before the show started, it was canceled and his 'career' as a game-show contestant came to an ignominious end. Next, he returned to the east coast and got a job, working at very low pay for a then revolutionary project: a webite focusing on state-wide politics in New Jersey. There was no print component, only a web edition. In those days, before Politico and its ilk, this was a new and radical approach to journalism.

Kornacki said that the rough-and-tumble of reporting on New Jersey politics give him an education and foundation in the essence of what politics is all about. He said he did not really understand politics until he was exposed to the reality of local and county politics in that state. During this time he also appeared, without pay, on a local cable TV show. Through exposure on local cable TV program and his political writing, he gradually gained some exposure and recognition.

He was asked to appear as a 'guest' on 'Hardball' with Chris Matthews. It happened that Joan Walsh, editor-in-chief at Salon.com, was also a guest on 'Hardball' the same day. Joan Walsh, impressed with Kornacki's poise and depth of knowledge, offered him a job writing for the high profile and well-respected website, Salon.com. During this period, he was also hired as a contributor to 'Roll Call' and the New York Observer. Eventually, nine months ago, these opportunities culminated in his being offered a position co-hosting a weekday afternoon show called, 'The Cycle'. Most recently he was offered the opportunity to host his own weekend show. Steve will start his new show in about six weeks. Look for it!

Finally, Steve answered many student questions about current political issues. When asked about the ability to make intelligent political observations in an extremely partisan environment, he said that political journalism is 'about thinking critically, asking critical questions' and that it was important not to hew to an extreme ideological line, whether democratic or republican. He said that people are more partisan then they realize saying, "Most people don't like to be labeled Republican or Democrat, but vote like they are." 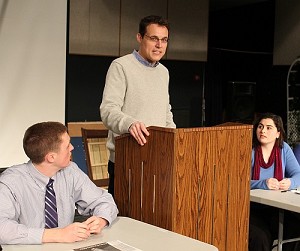