Groton Police Department in conjunction with all schools under their jurisdiction, both public and private, have or soon will have, participated in a lockdown drill designed to ensure that those responding from area police departments are familiar with various schools' locations, and layout of buildings and campuses.

Chief of Police Donald Palma said that he meets with school administrations before school starts, generally during August, to go over in detail plans in the event that a lockdown becomes necessary and to develop a schedule for the annual drill exercise.

The most recent drill occurred at Groton Dunstable Regional High School and involved members of Northeastern Massachusetts Law Enforcement Council (NMLEC) and members of police departments from Dunstable, Chelmsford, Westford, Concord and Middlesex Sheriff's office, along with members of their canine units. Groton's tracking dog Lola was joined by members of other canine units that specialize in detecting the presence of explosives, gun powder and narcotics. "We have an explicit training protocol. Officers and their canines need to become familiar with each building.

At the high school they were led through the building by members of the administration. In addition it is critical to conduct a sweep of the exterior of the building and a sweep of the parking lot in the event that an evacuation is required," the Chief said.

He added that all departments train on a much larger scale during summer when school is not in session and stressed that since Groton-Dunstable Regional High School is in such a remote location, that it is critical that members of these and other departments know exactly where the school is and determine the best and fastest route to the facility.

\"Time is of the essence, literally in terms of seconds and minutes," the Chief said, stressing, "We can't afford to have anyone get lost."

"This drill was planned months ago in conjunction with the principal and administration to ensure that defined procedures were followed. Teachers and students take this seriously and we will adjust those procedures as needed. This is why we practice. Response has to be timely and accurate. This affects every school in the community, whether public or private," he said.

According to the Chief, a lockdown drill has already been conducted earlier at Groton Dunstable Middle School and included not only the middle school but Florence Roche Elementary School, Twomey Center and the entire campus area. Drills at the private schools are slated for early 2013.

NMLEC is an area law enforcement council that has reciprocal agreements among the many towns that are members. Groton has been a member of this group for more than 20 years. The Chief said that Groton has been called on to assist Westford, Chelmsford and Shirley, among other towns.

"Planning and drills are critical to ensure fast response to crisis situations. We deeply hope we never have to put out such a call. The reality is that when horrible tragedy happens in small towns, in schools where children should feel safe and secure, there is no response that can be fast enough. We try to put plans in place to provide as much protection as possible until police arrive. Our deepest sympathy goes out to the families, first responders and police and fire departments that responded to the terrible tragedy in Newtown, Connecticut." 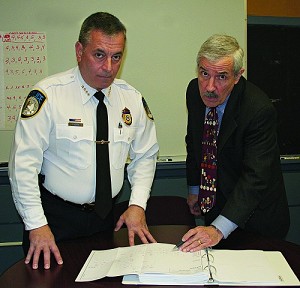