Groton School's Board of Trustees unanimously approved the appointment of Temba Maqubela as Headmaster, the eighth since the School's founding in 1884. The appointment culminates an intensive search process that attracted candidates from around the country and the world.

"Groton's enduring mission is to be an intimate and diverse community dedicated to inspiring lives of character, learning, leadership, and service. To be true to that mission," said Board of Trustees President James H. Higgins, "the Headmaster must embody a unique fusion not only of managerial talents but also of the School's values and aspirations. Temba Maqubela is such a person."

Mr. Maqubela and his wife, Vuyelwa, are lifelong educators and inspirational visionaries. Mr. Maqubela currently is Assistant Head for Academics and Dean of Faculty at Phillips Academy, Andover, where he began as a science teacher in 1987.

"It is with great humility that I accept the awesome responsibility of being the eighth Headmaster of Groton School. I look forward to getting to know

everyone on the Circle, as well as to meeting the extended Groton family," Mr. Maqubela said. "I thank all those who paved the way for me to take up such a position of prominence in one of the great beacons of light in our adopted country. Vuyelwa and I are excited to be joining as inclusive, nurturing, and erudite a community as Groton School."

Over 25 years at Phillips Academy, Mr. Maqubela chaired the Chemistry Dept. and directed (MS)2, a summer program that strengthens math and science skills among economically disadvantaged African American, Latino, and Native American public high school students. He launched ACE Scholars Program, which tackles the preparation gap among gifted students, and took the lead on Andover's Global Perspectives Group, which focuses on global education for students and faculty. Early in his career, Maqubela taught high school in Botswana and in Queens, NY.

Mrs. Maqubela teaches English, coaches track, and has headed a dormitory for 25 years at Phillips Academy. Like Mr. Maqubela, she has spearheaded diversity initiatives and championed increased access to educational opportunity. The Maqubelas' three children graduated from

Mr. Maqubela received a master's degree in chemistry and did doctoral work at University of Kentucky; he received a bachelor of science degree with honors from University of Ibadan, Nigeria. Though he is a fourth generation educator, he does not hold a high school diploma because he went into exile from apartheid-era South Africa, his native country, before graduating. A dedicated teacher and scientist, he received a White House Distinguished Teacher Award in 1993 and was inducted into the Hall of Fame for Northeast Section of American Chemical Society in 2002.

In addition to teaching at Phillips Academy, Mrs. Maqubela has directed the Independent School South Africa Education Program; launched, with her husband and other colleagues, a summer program, the African Studies Institute; and co-directed Andover Breadloaf Writing Workshop. She was diversity director at Pingree School, a fifth grade teacher at Pike School, and an English teacher at a high school in Soweto, South Africa. She received a master's degree in education from Lesley University, a bachelor's degree from University of Fort Hare in South Africa, and did post-graduate work at University of Witwatersrand in Johannesburg.

Mr. Maqubela will take over as Groton's Headmaster July 1, 2013. He is succeeding Richard B. Commons, who will become president of Harvard-Westlake School in Los Angeles. 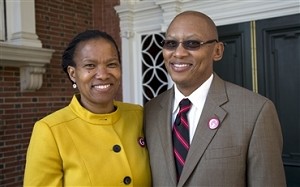