For the second time in less than six months, the Lost Lake area has been hit hard with structure fires, the most recent this past Friday on Boathouse Road where a four-alarm fire completely destroyed a home. No one was at the residence at the time of the fire. The cause of the blaze is still under investigation by the State Fire Marshall's office and the Groton Fire Department.

At 12.01 p.m., the call came into the Groton Communications Center reporting that smoke was seeping out of the eaves at 99 Boathouse Road. According to Fire Chief Joe Bosselait, the first truck from Center Station reached the scene in about eight minutes from the initial call, along with the Chief and the ambulance while the Groton Police already had an officer on site.

Shortly thereafter, Engine 5 from the Lost Lake Sub Station arrived manned by a full-time firefighter who came in on his day off. Chief Bosselait sounded another alarm and Fire Departments from the towns of Ayer and Westford responded followed by another call where Dunstable and Littleton arrived. Lunenburg also responded to cover the Center Station while all the equipment was at the scene.

Chief Bosselait said that the first hose line that was laid was directed to protect two, 120-lb, propane tanks adjacent to the house and one behind a wall some 15-feet away from the fire at an abutting home. "No propane tanks blew up. They were not even scorched and the plastic covering was not melted even though they were one and a half feet from the house that was on fire," the Chief said, stressing that the propane tanks were a priority as firemen were inside the house conducting a search for anyone in the structure.

The second hose line was directed to address the exposure of the next door house - to protect it from the flames' and the third line was used by the entry crew going into the house. "When Ayer arrived, they cut a vent hole high on the roof to direct the fire away from the propane tanks," the Chief said.

Chief Bosselait stressed that although the fire was serious, there was no report of injury to any firefighters or residents.

The Lost Lake area is made up of a multitude of very narrow roads, many of them dead-ending at the lake. These roads have barely enough room for one car to pass; many of them are still dirt roadways, and clearly a very tight fit for large fire apparatus to navigate.

Population of the area started in the 1920s as a getaway for city dwellers with small densely packed summer camps on tiny lots. Over the years, many of these structures have been renovated and become year-around residences but the narrowness of the roads and the density of houses still exists. Only a small portion of the Lost Lake area - possibly as little as one third - has fire hydrants. The remainder of the residences - many sited where it is impossible to draw water from the lake, would rely solely on tankers to provide water needed to put out a fire.

A new fire station for Lost Lake was approved by voters in at the 2002 town and $1,450, 000 was earmarked "for the purpose of remodeling, expanding, making extraordinary repairs to, equipping, and furnishing the Lost Lake Fire Station."

Since that time, the Lost Lake station has served as a substation, meaning that there is no personnel assigned to man that building, and all full-time firefighters/EMT are located at the Public Safety Building on Pleasant St. 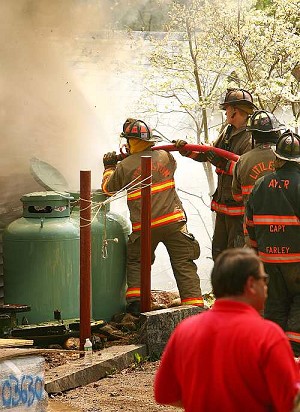