Voters will have three choices to make on the Fitch's Bridge article at the Jan. 26 Special Town Meeting: to vote only for demolition of the aged structure; to vote for both demolition and replacement, or to defeat the article entirely.

The bridge, if replaced, would be used only by pedestrians, bicyclists and equestrians. No motorized vehicles would be allowed.

Town officials including Police Chief Donald Palma and DPW Director Tom Delaney told Selectmen of the dangers at the bridge, including kids jumping through rusted bridge rafters into the water and use of alcohol by many who frequent that area. Chief Palma said that any accident there would also endanger EMTs and firefighters who respond to emergency calls. He stressed, "It is an attractive nuisance, and calls come in for trespass and noise. We had 30 calls in 2011, and 70 calls in 2012. We need to do something." He added that oftentimes kids are jumping from the bridge into shallow water, where serious injuries could occur.

Selectman Chairman Stuart Schulman asked the chief, "If a new bridge is installed, wouldn't we still have the problem?" The Chief answered "yes," but pointed out that many bridges have bumpers along the sides that prevent people jumping over.

Selectman Josh Degen, citing the historic nature of the steel truss bridge asked if an engineer had studied the bridge to see if it would be repaired. Greenway committee Chairman David Manugian advised, "The committee did look at this (possibility) but the cost of repairs started ballooning," pointing out that "lead paint over the river is a problem." He also told the Board that much of the state money available for bridge repairs is for those with vehicular traffic, and not for pedestrian bridges. He noted that the committee even contacted the engineering departments of colleges for help but didn't get any takers.

Manugian said that the demolition cost could run from $160K to $200K with an additional $400K for a new bridge. Degen pointed out a few areas where some monies could be save, specifically seeding the riverbank for $75K and a few other items. Schulman said "We want this as lean as possible."

The Greenway Committee, according to Manugian, "Plans to set aside some money for a high definition survey and a 3D scatter survey of the bridge, and a CAD [rendering]. If it is rebuilt, we would have the data on the bridge, and this would present an opportunity for the future." He added that the replaced bridge spanning Nashua River would connect 70 miles of trails on the Groton side with 30 miles of trails on the West Groton side. 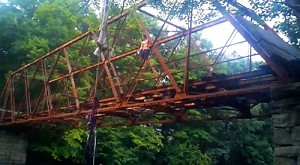