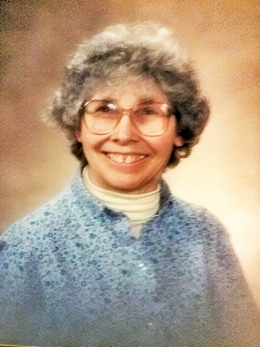 Nancy Stoops, who carried with her a living history of Groton for over 95 years, passed away at her daughter's home in Ft. Fairfield, Maine on Friday March 25, 2022. Nancy was the sixth child of Gertrude and Rodney Monk, also longtime residents of Groton. The eras she lived through started before the Depression, WW2 and the Baby Boom that followed, up to the present, and she carried her stories and memories of those years as life lessons for all she met.

She graduated as Valedictorian in 1944, yet would add, “If so many classmates were not away in the military, I wouldn’t have been first in my class.” She attended Antioch College in Ohio where she met Don Stoops, being partnered with him in a first aid class. In April 1947, their wedding was given by her work-study employer International Harvester at the Chicago Museum of Science and Industry, complete with a tractor topping the cake! They headed west a couple years later with an infant daughter, hoping to eventually settle in New Zealand, but their growing family – and her heart – could not go any farther from her family and friends so they settled in the Pacific Northwest. The family grew to have eight children.

For many years, they remained in that area of the country, exploring beautiful places and making lifelong friends. They returned to New England as her parents aged, spending several years in Vermont, in Sterling, then returned to her family home in Groton in 1971.  There she picked up with old friends, cared for her father in his final years, and was part of the local community.

She finished her undergraduate studies at Atlantic Union College. Several years later, she attended New England School of Law. She returned to the Pacific Northwest for 19 years, working for the state of Washington, and passing the Bar Exam there when she was 70 years old.

She spent vacations traveling throughout the country to visit her children and grandchildren, and explored special places like Barrow, Alaska, and Belgium, often on her own. In 2008 she and Don returned to Groton, to the house where she had grown up. Up into 2020, they were familiar faces in the neighborhood, taking daily walks near the elementary school accompanied by their little dog, Angel.

After Don passed away in Dec 2020, Nancy moved to Maine to stay with two daughters. All eight of her children were able to visit her in the final weeks of her life, when it was apparent that she was nearing the end. Her children all agree that they were greatly blessed to have her for their Mom!

Our mother is greatly missed. A gathering is planned for family and friends this Saturday, July 23, across from her childhood home on Champney Street, to honor and remember her.  Many good stories are anticipated!