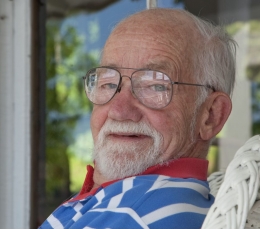 Born in Northampton, August 30, 1932 to Richard and Adelaide Bissell, Meredith was the second of their 11 children. Meredith attended the University of Massachusetts where he met and married Jean Forbes. After graduation, Meredith became an insurance broker and did carpentry. He and Jean moved to the house next to his parents’, which Meredith added on to as their family grew: two children Meredith Jr. (aka Clint) and Susan.
While doing carpentry at a new high school in Lunenburg, Meredith heard of a teaching position. He filled the opening and went on to teach history, English, and was a guidance counselor there. Meredith took, and taught, night classes at Fitchburg State College earning a Master’s degree. He was involved with Sunday School, sermons, and other activities at the Christian Union Church in West Groton for many years.
After retirement, he continued carpentry as a hobby. He never passed up a yard sale or anything chocolate. He loved paddling on the Squannocook River and watching the many variety of birds attracted to the plantings in their back yard.
After 67 years of marriage, Jean passed and Meredith continued living in his Kemp St. home with assistance from Holly Raymond, his sister Carolyn, and nephew Dana, among others, until his death Wednesday, February 9, 2022.
Meredith is survived by brothers and sisters: Joyce, George, Gwendolyn, Eleanor, Norman (Chip), Carolyn, and Betsy; his son, Clint Bissell of Thetford, VT; his daughter, Susan Becker of Northumberland, NH. Meredith also leaves behind three beloved grandsons, Kyle Bissell, and his wife SeraRose, of Greenfield; Erik Becker of Lancaster, NH.; and Leif Becker of Concord, NH; two great-grand daughters, Aviendha Rowland Roth, and Kestrel Bissell of Greenfield.
Meredith (and Jean) watched hours of Masterpiece Theater – “Poldark” (how many seasons?), “Downton Abbey”, and others. Most multiple times. They also loved watching and feeding the wide variety of birds in their back yard. Please consider a donation to WGBH in Boston, Mass Audubon, or your favorite cause, in lieu of flowers.