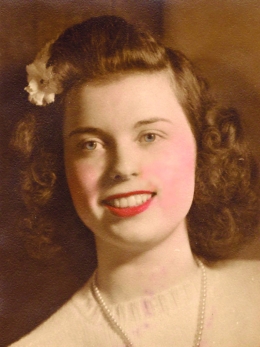 Mary Elizabeth Gallipeau, 95, and a long-time resident of Groton, passed away peacefully on Sunday, April 10, 2022. She was the devoted and loving wife of the late Robert Gallipeau, who passed away in 2021.
Mary was born in Rochester, NY on November 17, 1926, a daughter to the late William and Alma Baker. She married Robert B. Gallipeau in Rochester on August 21,1948. Mary had her first child on August 25, 1949, and then moved to Massachusetts where Robert and Mary would raise their family of five children. They lived in Brighton, Natick, Sudbury, and moved to Groton in 1965. Mary passed away on Palm Sunday, April 10.
Mary suffered the loss of her husband Robert last year, also on Palm Sunday, after 73 years of marriage. In addition to her husband, Mary also suffered the loss of a son, Fr. Mark Gallipeau five years ago.
Mary is survived by her children David, Stephen, Susan, and Erick, seven grandchildren, six great grandchildren, and one great, great grandchild.
Mary was nicknamed "Herc" by her young schoolmates, short for Hercules, because of her strength. She had a beautiful singing voice and sang on the radio when she was young, and with the local choral group "The Hot Shots" in Groton. She was known by all as a joyful, smiling, energetic, giving person, never asking anything for herself. She will be greatly missed.
Family and friends will gather to honor and remember Mary for her funeral mass which will be celebrated at 10
a.m. on Tuesday, April 19, 2022 in Our Lady of Grace Parish worshipping at St. James Church, 13 St. James Ave., Groton. Interment will follow in Groton Cemetery. There will be no public visita- tion.
Arrangements under the care of Badger Funeral Home, Groton. To share a memory or offer a condolence visit, www.badgerfuneral .com