Fitch's Bridge, in one form or another, had allowed people, horses and goods to cross Nashua River for perhaps 150 years, but a new sight appeared Sept. 8, 1892, a day of celebration in Brookline, NH, attended by Gov. Hiram A. Tuttle and 3,000 others. On that day, the Brookline and Pepperell Railroad (RR), managed by the Fitchburg RR until July 1900 when the Boston & Maine RR took control, formally opened its new rail line from Muscatanipus Pond (now Potanipo Lake) in Brookline to Squannacook Junction in West Groton. At that point, it met the Peterborough and Shirley RR that ran from Ayer along the southern border of the current Groton Town Forest and continued on to Townsend and Greenville, NH. (Note: About four miles of this railbed in Groton and Townsend may soon become the Squannacook River Rail Trail due to the efforts of the members of the Squannacook Greenways.)

For the next 40 years, up to six passenger trains a day and freight trains carrying bricks, granite, lumber, and ice, passed over Fitch's Bridge Rd. on abutments that still stand strong between Nashua River and Pepperell Rd. The 14-mile trip was a scenic one, going along Nashua River up to the Pepperell Station (now the Pepperell Family Pharmacy on Main St.) and then north along Nissitissit River to the southwest corner of Hollis where it headed west to Brookline. With the emergence and popularity of automobiles, passenger service ended in September 1931, but the Fresh Pond Ice Company of Cambridge continued to get its yearly supply of ice from the ice house at Muscatanipus Pond until 1935, when the ice house was destroyed by fire. By then there were no other regular customers and manufactured ice eliminated the need for the line from Pepperell to Brookline. Service to Pepperell continued until the line was finally abandoned in 1942.

During this heyday for railroads, Fitch's Bridge itself was modernized. It was first built around 1740-1750 and then was repaired or rebuilt over the next 120 years, but the last wooden structure, built in 1871, was replaced by a steel bridge Feb. 12, 1898. The steel bridge was repaired once in 1921 but was closed to traffic around 1965 due to lack of adequate structural integrity and it has not been repaired since then. For a number of years it was used by pedestrians despite some warning signs and flimsy barriers, but by around 2000 the flooring had significantly deteriorated and the bridge was deemed a hazard and the town closed off the bridge with large concrete barriers.

In March 1998 Selectmen chartered Groton Trails Committee. At the time, due to its prominence in Groton's Master Plan, there was considerable interest on the part of several town boards and committees in repairing and re-opening Fitch's Bridge, and that became a primary focus for the Trails Committee as well. As a result of efforts spanning many decades, a patchwork quilt of parcels were acquired by many public and private organizations and they are all finally connected by trails to Fitch's Bridge. Along the east side of Nashua River, a continuous trail goes by the Groton Fairgrounds, owned by the town, then through Taisey Conservation Restriction around the Partridgeberry development, then through Groton Place and Sabine Woods, then across Groton School, and finally to Surrenden Farm at the border with Ayer. A complementary continuous trail on the west side of Nashua River was just completed in December 2012 with addition of a conservation restriction along 1.3 miles of the Brookline and Pepperell RR right-of-way. This trail goes all the way to Groton Town Forest, via the Blood Land acquired by the West Groton Water District and to Squannacook River along the border with Ayer.

In addition to these north-south trails along Nashua River, Groton Trails Committee has been developing east-west connections as well. On the west side of Nashua River, trails connect to the old Brookline & Pepperell RR south of Fitch's Bridge that head west through Groton Conservation Commission, Groton Conservation Trust, and New England Forestry Foundation parcels. A continuous trail goes from there all the way across The Throne area of West Groton to Rockwood Ln. near Bertozzi Wildlife Area on Squannacook River. Altogether, there are more than 30 miles of trails west of Nashua River that are part of West Groton's evolving trails network.

On the east side of Nashua River, hikers, bicyclists, and equestrians can take Fitch's Bridge Rd. east to Nod Rd., where they can access the Commonwealth's Department of Conservation and Recreation parcel, J. Harry Rich Tree Farm State Forest, which connects with Nashua River Rail Trail. Alternately, Gratuity Rd. can be taken to Arlington St. from which there is also Rail Trail access. From the Rail Trail, other trails can be taken that connect nearly continuously to the eastern, northern, and southern borders of Groton. Altogether, there are more than 70 miles of trails east of Nashua River in Groton that are part of that area's evolving trails network.

Saturday, Jan. 26, at Special Town Meeting, citizens who attend will be asked to vote to approve funds for demolition of the current bridge and purchase and installation of a 21st century replacement for Fitch's Bridge. The Trails Committee and the Groton Greenway Committee are co-sponsoring a guided hike over the trails that lie east of Pepperell Rd. on Sunday, Jan. 20, at 1 p.m., starting at Fitch's Bridge. Join them to see and learn more about the history of Fitch's Bridge and to experience some of the trails on the west side of Nashua River. 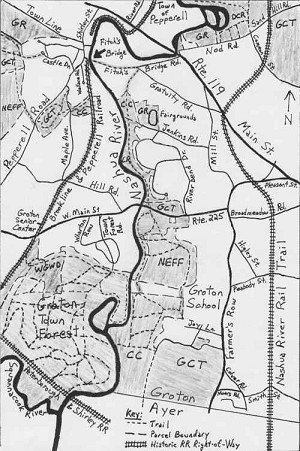