With Hope In Sight, This Groton Family Business Struggles To Regain Its Footing 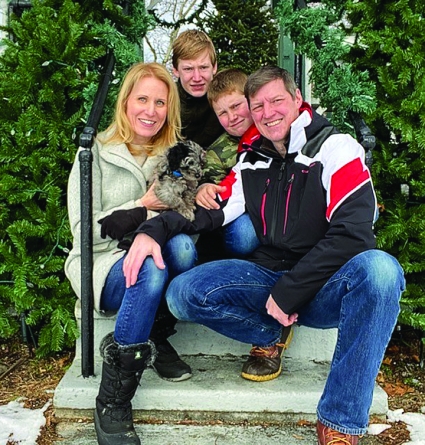 Hit Hard by the Pandemic Shutdown, Anytime Fitness Will Make Final Push to Regain Enough Members to Resume Business as Economy Slowly Reopens.
by Robert Stewart
After more than a year struggling to stay in business through the ups and downs of shutdowns and government restrictions, a Groton business owner is facing the ironic and perhaps tragic prospect of closing his business while signs of hope appear on the horizon and optimism creeps into the economy. Mark Sinclair, owner of Anytime Fitness on Main St., finds himself in the position of possibly closing his business after months of fighting to keep it open during the worst of the pandemic and ironically considering it with hope looming so near.
Sinclair, a relative newcomer to Groton having lived here for seven years, bought Anytime Fitness on Main St. in Nov. 2019 just four months before his business would be turned upside down by a worldwide pandemic and unprecedented government response to prevent its spread. Sinclair has been in the fitness industry for 25 years and owns three other Anytime Fitness franchises in Melrose, Acton and Maynard. Sinclair bought the Groton franchise in hopes of improving its customer satisfaction image and increasing its revenue. To do that, he planned on using the model that brought him much success with the Melrose franchise. There, he spent a lot of time and effort to reach out to customers and members to build what could be called “social capital” that in turn led to loyalty and an emotional identity with that franchise.
Sinclair noted that according to Anytime Fitness corporate metrics, the Melrose franchise was one of the lowest ranking franchises in the corporation in terms of customer satisfaction. Through his customer out reach efforts, he was able to improve that ranking and make the Melrose franchise one of the better Anytime Fitness franchises in terms of customer satisfaction. His goal was to apply that model to the Groton franchise and build up its customer satisfaction image.
That never happened. Before he could turn his attention to the Groton franchise, the COVID-19 pandemic swept in with a quickness that left little time for business owners to fully grasp the impact that shutdowns and restrictions would have on economic activity. In response to the state’s emergency declaration and subsequent government ordered shutdowns for many sectors of the economy, Sinclair closed his gym doors on March 17, 2020. It was four months – in July 2020 – before he could reopen his doors and then only at a small fraction of capacity.
Those four months of closure were devastating to his business and the impact on his Groton franchise was even more severe. While he was able to rely to some degree on customer loyalty to maintain membership levels in his other three franchises, he was unable to duplicate that experience with the Groton franchise. His limited time of ownership of the Groton franchise proved difficult to overcome. He stated, “Not having any type of relationship with most of the Groton members meant I had no emotional capital built up that I could lean on like I had at my other clubs. I simply did not have the time to introduce myself or club manager Shawn O’Brien to enough members to leverage the plead ‘Hang in there with us.’...That lack of a personal relationship with us, which is so critical in our business, meant cancelling was just transactional rather than emotional.”
Despite stopping the collection of membership fees and putting all member accounts on-hold indefinitely, cancellations continued unabated. Sinclair said that from March onwards there was a steady flow of membership cancellations. The longer he stayed closed the more membership cancellation requests he received. When the state announced capacity rollbacks and business curfews following a spike of infections after the holidays, Sinclair said he experienced another wave of cancellations that also hit his other franchises. Shutting down gyms for the second time was particularly hard for Sinclair and especially when you own a gym that distinguishes itself from others by offering 24-hour access.
Sinclair’s losses were substantial. Nearly half of his membership in Groton disappeared and membership fees from the remaining half amounts to $4,000 less than his monthly rent. The Stimulus bills passed during 2020 did nothing to help Sinclair recoup any of his losses or help him meet operating expenses. He said all the PPP (Payroll Protection Plan) relief funds were based upon a businesses 2019 payroll and operating expenses. Because Sinclair owned the Groton franchise for only six weeks in 2019, there was little or no payroll expenses on record.
Sinclair said he will do everything possible to stay open and not close his doors permanently. And his will to stay open will be severely tested as he reaches out to grasp the hope of returning to normalcy that appears to be so near. He states, “It means so much to myself, my wife Kelly and our sons to have the Groton Anytime Fitness be successful and I know in my heart and bones it could take off if I have enough runway!...It would crush me not to have the opportunity to help the Groton Anytime Fitness realize its full potential by helping our members, current, past and future realize their full potential.”
Comment Policy:
Please send comments to grotonherald@gmail.com

Should the town bylaw be changed to allow the Select Board to grant temporary liquor licenses in public parks?
YES
40%
NO
60%
Total votes: 30