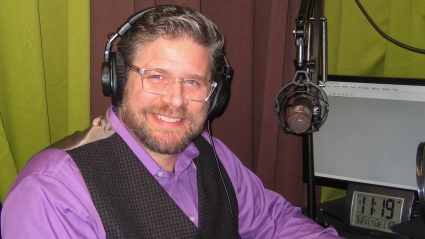 Colby Elliot has a velvet voice capable of many accents and personalities. For 18 years he’s been using that voice and his kaleidoscope of accents doing just that since his teaching career morphed into recording books. New to Groton, Colby uses the pump room in his home’s ground floor level as his soundproof, recording studio.

After 20 years of living in Aurora, Colorado, Colby and his family moved to Groton when his wife Sandra transferred to a local bank with multiple branch locations in this area. Along came daughters Helena and Georgia while son Jake, who just graduated college, remains (for now) in Nebraska.

The Elliots chose Groton because of the schools, the area’s charm and its central location close to the mountains of New Hampshire and the beaches of Cape Cod. They bought a home on a secluded spot and as we sat in their sunny kitchen with peaceful views of undulating rocky hills and thick woodlands, we spoke about their transition to New England.

“I grew up in North Platte, Nebraska often spending part of the summer near a trout stream in a cabin without running water so this really isn’t the country for me,” Colby laughed. “My childhood was, as they say, idyllic. My dad was a state trooper and we enjoyed as much of the ‘wild side’ as we could, including Mount Rushmore.

“My wife Sandra grew up in Central City, Nebraska and so we share a similar childhood. Nebraska does three things very well, ‘steak, corn and football’. I fell in love with listening to books on tape, walking to school with my Sony Walkman, learning from amazing voices like Vincent Price reading Edgar Allan Poe. Listening opened up a formerly unknown world and I never guessed that creating audio books and doing voices would become my career.

“I graduated high school in 1988 after which I received my Masters in Applied Communications at The University of Denver. Before I founded Last Word Audio, I taught Performance Theater and Technical Theater at public schools for 12 years.

“When I decided to create audio books I spent huge amounts of time at bookstores and libraries finding books I would like to record. I would then contact the writer or the publisher of those books. My favorite books can be classified as ‘geek and nerd’ lit. Topics included science fiction, fantasy literature, role-playing, and comic books. I also happen to be a big fan of the ‘Gilmore Girls’ and was really lucky to be able to record Coffee at Luke’s which is a gabfest involving all things Gilmore!”

Colby currently records on a digital download format for Audible and iTunes and is looking for an MP3/CD publisher. He recently received an “Earphone’s Award” award for “Exceptional Audio/Audio File” and was a finalist for the 2017 Audie Award.

Visit his website www.lastwordaudio.com to hear fascinating teasers of some of Colby’s releases including, ‘Pest Control’, a humorous look about all kinds of pests and the people who try to fight them; and ‘Masters of Deception’, the history of prolific hackers of the late 80s and 90s.

Before I left, Colby spoke a few lines from one of his recent books in a completely believable Russian accent and when I returned home and listened to some of his recordings, I understood how one person’s remarkable voice can weave an unforgettable story with unforgettable characters.

His website also lists a schedule of upcoming appearances, including the Lawrence library in August. Plans are being made for a session at Groton Public Library soon.