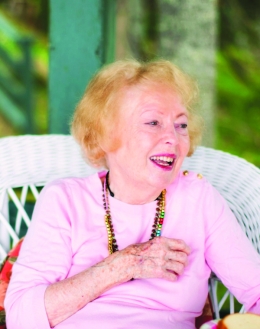 Barbara T. Hamlin died at age 95 on Friday, June 10, 2022 at Kaplan Hospice House in Danvers, after a several- day stay. She was a talented seamstress, a writer and author, a lively hostess, avid crossword puzzler and Scrabble player, and the loving matriarch of her family. For the past four years, she had lived in Ipswich, with her son and daughter-in-law, Sam and Eve Hamlin.

Born July 28, 1926, Barbara Trescott grew up in Hibbing, Minnesota, the oldest of Reginald and Mabelle Trescott’s three children. Despite the Depression and World War II, she had only happy memories of her youth and was forever proud of her Iron Range roots. After high school, she moved briefly to Bremerton, WA, to live with relatives and work in the Bremerton Navy Yard. When Barbara, a sparkling redhead, came to work in a kelly-green suit, she caught the eye of Ensign Norman Hamlin. They married June 21, 1946, and moved east to start their life together. While Norman pursued a career as a naval architect, Barbara raised their three children, Rebecca (Becky), Jennifer, and Ronald (Sam) in Washington, DC; Weymouth, MA; and Huntington, NY. In 1987, Barbara and Norman retired to Brunswick, ME.

As a teenager, Barbara loved taking tickets (and watching the movies) at the State Theater and working as an assistant to the hatmaker at a Hibbing clothing store. As a newlywed in Washington, DC, she found work, and friends, as a salesclerk at Woodward & Lothrop department store. While her children were young, Barbara volunteered as a Camp Fire Girls leader and Sunday School teacher. Later, she went to work full-time, first as a kindergarten teacher, then as a school secretary for 20 years. She also taught evening classes in quilting.

Barbara was a wizard with needle and thread, making custom clothing for her children, from snowsuits to prom dresses to sport coats, as well as a cover for Norman’s boat. A skillful and creative hand-quilter, she made dozens of quilts for family and friends, including two “heritage” quilts commemorating the history of the Hamlin cottage in Christmas Cove, ME. She also made braided wool rugs, hand-pressed flower lampshades, and delicate egg-shell ornaments that still adorn her children’s homes, 60-and-more years after their making.

Although she never earned a college degree, Barbara was an honorary alumnus of Webb Institute of Naval Architecture, in Norman’s Class of 1944B. She also published a memoir (From Minnesota to Maine and the Stops In Between) and was proud to have served on the board of directors of the Oasis Free Health Network and the board of deacons at First Parish Church, both in Brunswick, and the board of directors of the Thompson Ice House in South Bristol, ME. She also was a member of Union Church in South Bristol; a member of Friends of Bowdoin (Brunswick); and a host for Bowdoin College international students and winter sports teams. While in Brunswick, she participated in two sewing groups, three book clubs, and the writers group at Thornton Oaks, where she lived for nine years before moving to Ipswich.

Even as she began to forget her own accomplishments, and had to reread her own book to remember her past, Barbara never lost her outgoing personality, brightening up to greet family and friends and receiving her nightly no-gin-and-tonic with a spirited, “Delicious!” And after hosting so many parties through the years, she still tried to make visitors welcome, regardless of whose house they were visiting.

The family extends special thanks to Joanne, Marcia, and Andrea, Barbara’s special friends for the past several years; and to the staff of Kaplan House for extraordinary care.

The family will host a celebration of Barbara’s life July 2 in Ipswich. A second gathering is planned for July 30 in Christmas Cove. In lieu of flowers, the family suggests memorial contributions to the Thompson Ice House Museum, South Bristol, ME, or the Kaplan Hospice House, Danvers, MA.