Visiting Groton-Dunstable and Westford Academy battled to a scoreless tie in this a non-league soccer game.

Crusaders controlled much of the game, outshooting the Ghosts 9-6 but were never able to put one past keeper Sam Brewer. Westford gave up size but played a determined defensive game, clearing any ball that could result in a Crusader scoring opportunity.

Nice to have Matt Tornaritis back. He and Nate Pomeroy work beautifully together, each anticipating, moving to open space, one or the other quickly delivering deft passes and creating scoring opportumities.

Pomeroy, with several scoring chances, will lose sleep mulling over the many "just missed" opportunities. With under five minutes remaining in opening 40 minutes, Pomeroy broke through the Grey Ghosts D-backs and hit a laser that Brewer, hurdling his body through the air, managed to make the save.

In the second half, it was Pomeroy again, breaking in on a nice individual effort but clanging a low hard shot off the goal post.

"The starters will play a bit and then you'll see all of my players today," said head coach Sean Wisbey. "I want Matt (Tornaritis) to get his legs back. We are fairly set as what our seeding will be and I want to be healthy going into the tournament." Sounds like a plan I thought.

However, there was very little substituting throughout. The game was spirited with an air of urgency with both teams playing excellent physical defense.

Saturday, GD ended regular season with a 4-1 victory over visiting Quabbin. Senior Alex Murphy (assist: Dan McGuinness) scored in each half including the game winner. Doug Rosa (Morgan Manthous) added a goal and an assist.

The game against Quabbin was the last regular season home game for the current group of seniors who have an impressive 44-8-10 mark over the last three seasons. Crusaders finished play undefeated 9-0-1 in MidlandB, 12-2-4 overall. Not bad after a 1-2-1 start to the season. MIAA web should  have Central Mass. District Tournament pairings Wednesday, 10/31. 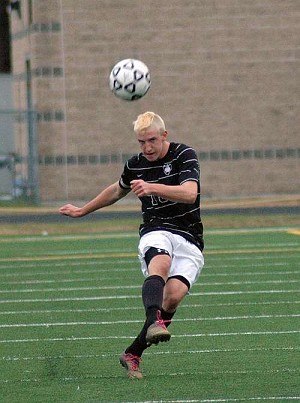