Two steps forward one step back... a catchphrase reflecting on an anecdote about a frog trying to climb out of a water well; for every two steps the frog climbs, it falls back by one step, making its progress arduous. "Wikipedia."

Two steps forward, one step backwards is the way the Crusaders' last few games have gone.

Outscored 15 to five in first quarter, Woods "graciously" discussed the team's shortcomings with his players before having a conversation with assistant coach Greg Gillette.

"Well, we weren't getting any offensive looks so I suggested moving Corey (Romich) to the two, (shooting guard) and senior Matt Conlin to the point," offered Gillette.

Now the good stuff! Chalk one up for Gillette. Over the next eight minutes, GD outscored Oakmont 22-7. Shut down defense, eight points each from Corey Romich and Matt Conlin and four and two respectively from Charlie Burke and Phil Dubay propelled Crusaders to a 30-22 half time lead. With two from beyond the arc in his torrid stretch, Romich has no fear stepping back and shooting the three-ball.

Spartans managed just 16 points in second half and that just was not going to get it done. Matt Conlin (7 assists) and Corey Romich led Crusaders with 15 points each, Phil Dubay added 11 points and seven rebounds while Charles Hill had six points and eight rebounds.

"We went to a zone and switched Corey to the two. The team did a nice job, played the way they are capable of playing, continued rebounding and playing defense," added Woods. GD hosts Quabbin Thursday, Jan. 31. (Date changed from 2/1) 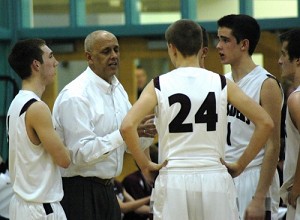