August 3 and 4, 21 residents from Groton/West Groton will participate in the 34th annual Pan-Mass Challenge (PMC), the nation's first charity bike-a-thon that raises more money than any other athletic fundraising event in the country. They will be among 5,500 cyclists who will ride with the collective goal of raising $38 million to support adult and pediatric patient care and cancer research at Dana-Farber Cancer Institute through the Jimmy Fund.

PMC riders range in age from 13 to 88. Some are seasoned tri-athletes while others are weekend warriors having trained for this event alone. Many PMC participants ride in honor of a family member or friend lost to, or being treated for, cancer. All share a passion and desire to one day find a cure for the disease.

"I started riding in 2011 in the memory of a friend's son who had passed away the previous year," said West Groton resident Andrew Brandt. "During that ride I met former Bruin Bob Sweeney. While riding with him, he extended an invittation to join the Boston Bruins Foundation team if I was going to cycle more PMC rides. The Bruins do an amazing job helping riders with fundraising goals. Last year as a team of 23, we raised more than $175,000.

"I also ride for many family members who have dealt with this terrible disease," continued Brandt. "In three years, I have raised more than $23,000 for the PMC. My family and I made an agreement that if their dance studio fundraiser raised more than $750, I would ride with a tiara on my helmet and if they raised $1,500, I would wear a tutu. They received more than $2,600 in donations for the PMC Jimmy fund." Needless to say, Andrew Brandt, with the physique of a football linebacker, will get some attention wearing a tutu and tiara on his 193-mile ride.

The average PMC cyclist trains for several months. Doctors ride alongside their patients, survivors ride, grandparents cycle with their grandchildren; and along the routes, on lookers show support, thanking and applauding the cyclists' efforts. All agree the PMC weekend is a powerful and emotional experience for everyone involved.  The camaraderie shared by 5,500 cyclists, more than 3,000 volunteers, and thousands of spectators, is one reason cyclists from 36 states and eight countries return to Massachusetts each August to participate in the PMC.

Groton resident Ken Jeffries, who has cycled several PMC fundraisers, was diagnosed with a brain tumor this past February. He had brain surgery in early March and then six and a half weeks of radiation, four weeks off and then a chemo routine for 12 months. Jeffries skied and worked boot camp the week before surgery, snow shoed two days after his procedure and downhill skied two weeks later. He continues to fight, and is bound and determined to cycle the PMC this year!

The PMC is a fully supported bike-a-thon with food and water stops, mechanical and medical assistance, luggage transportation, and lodging.

Cyclists choose from 11 routes of varying mileage designed to cater to all levels of cycling strength and time availability. There are six two-day routes that range from 153 to 190 miles and five one-day rides that range from 25 to 110 miles. In 2013, cyclists are required to raise between $500 and $5,000 to ride depending on the route they choose. This commitment to the fundraising portion of the PMC is a testament to riders' dedication to the cause and their belief in the PMC mission.

"I find the Pan Mass Challenge to be deeply meaningful," recalls Lawrence Academy administrator Robinson Moore. "The comradeship amongst the riders is inspiring; the volunteers are enthusiastic and so helpful, and well-wishers along the course keep me going the whole way. I am pleased and proud to report that, thanks to my many sponsors, I have raised more than $90,000 for cancer research in the past 14 years. This year, I will be riding with Team Elizabeth in memory of Elizabeth Alling Sewall. Proceeds from our ride will go toward the endowment fund that has been established in Elizabeth's name at the Dana Farber Cancer Institute. I hope you will contribute to fight against cancer in her name."

"We are cycling the two-day Sturbridge to P-town route," said Groton's Tricia Upton.  "Our team, Groundhog PMC Express, is a 12-member PMC team that ride and train together for the 193 mile, two-day event. The Express have been together since 2006 and have raised more than $397,000 to date with every dollar going directly to Dana Farber research.

"One of the PMC fundraising events we host is the Groundhogs 2nd Annual Wine Tasting to be held at the Red Tail Golf Club at Devens this Saturday, June 15 from 5-8 p.m.," continued Upton. "Live music, enjoyable wines from around the world to sample and delicious appetizers!" Team members and sponsors have donated wonderful raffle items: Red Sox vs. Yankees tickets, Celtics tickets, Match Box 20 concert tickets, wine baskets and more! Tickets are $25.00 per person donation at the door.

The following list includes Egift numbers and the names of the Groton/West Groton residents cycling in the 2013 PMC. Please consider making a tax-deductable check to "PMC/Jimmy Fund" and send to one of the individuals. You may also give electronically at www.pmc.org.

We are more determined than ever, because until there is a cure, we ride!!! 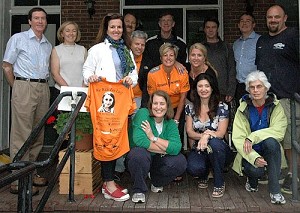