Maybe it was the first girls' lacrosse tournament for No. 5 seed Littleton (9-3, 15-4 Midland B League). Maybe it was nerves. But with barely 12 minutes completed in the first half, Littleton was in a 3-0 hole, compliments of goals from GD seniors Lauren Kraemer, Emma Ordemann and freshman Niki Wilkinson. Tigers' coach Rich Fulvi called a timeout, settled the girls who responded with three unanswered goals knotting the game at 3-3.

Livy Penney (3 goals, 3 assists) and Olivia Aumais (2 goals) potted goals to push GD ahead 5-3 but Littleton tied the game at fives with three minutes left in the half, the tying goal coming with the Crusaders down a player.

Penney whistled a bullet of a shot past Tigers goalie Nicole Patterson, just under the cross bar to give GD a 6-5 lead at the break.

Center Bridgit Schofield gave Littleton a 7-6 lead early in the second stanza, but Kraemer, on a free possession shot, evened the game at 7-7.

Olivia Aumais scored her second goal of the game with 11 minutes left, breaking the 7-7 tie and putting No. 4 Groton-Dunstable ahead for good.

"I don't think we played our best game but we won," commented Groton-Dunstable coach Gary Kraemer.

"The defense, led by Katie Judge has been solid all year and was again today. She had some key ground balls and forced turnovers."

"It was my last home game and I wanted it to be a winner," gushed Judge who was making defensive plays all over the field.

"Maria (Antonellis) in goal was outstanding. Huge second half for her stopping seven of eight shots in the half with 14 saves overall. And she's only a freshman," grinned Kraemer.

"I knew I had to step up and be more aggressive," said Antonellis. "I try to challenge rather than just wait for them to shoot."

No.1 seed Algonquin (16-3) defeated Nipmuc, 20-4 in the quarter-finals and faced No.4 Groton-Dunstable in a Semi-final game on Wednesday, June 5 at Foley Stadium in Worcester. (Checkwww.grotonherald.com for score). A win would send the Crusaders back to Foley Stadium on Saturday, June 8 to play for the Central Mass. Championship. 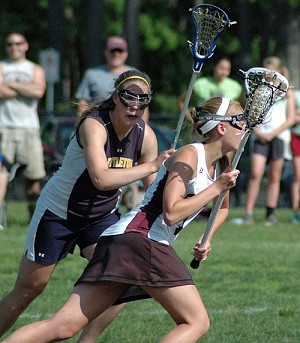