It seems only right that the seniors should play the whole game and help get the win in their last high school field hockey game. Sara Tometich, Sam Vervaeke, Lauren Kraemer, Rebbeca Romich, Jaime Park, Liz Gonzalez, Allie Baxter and Lauren Johnson were going to make sure they had good field hockey memories to talk about at their high school reunions.

Crusaders dominated play so completely that the visiting Red Raiders (0-9-1, 2-14-2) never got past midfield for most of the first half with poor Liz Gonzalez looking very lonely in goal.  At 19:20 in, Lauren Johnson gathered in a nifty pass from Michelle Herlihy and pushed it past Fitchburg keeper Whitney Payton, who stopped five of the six shots she faced in the first 30 minutes. The Crusaders led 1-0 at the half and it could have been more but for Payton, who was outstanding in goal, making 16 stops in total to keeping the Raiders in the game.

Lauren Johnson with an assist from Kelsey Hannemann got her second goal 8:26 into the second half and, with the way the Crusader defense was playing, it would be difficult for Fitchburg to come back in this contest.

Michelle Herlihy capped off the scoring with under four minutes remaining. Elizabeth Gonzalez had three saves to post her second shutout of the season.

Crusaders tied Algonquin (6-2-2, 12-4-2) twice this season and split with Wachusett (5-4-1, 10-6-2). Not bad considering those teams finished second and third respectively in the Midland A league.

"The team had excellent overall speed, good chemistry and was very capable offensively. We had depth, experience and were deep in goal. And they're a great group of girls," said Desmond.

"Still, it was quite an adjustment moving from Midland C to A," she continued. "Our schedule included Wachusett, Algonguin, Fitchburg, North Middlesex, Shrewsbury, Leominster and Milford. "We weren't ready at the beginning of the season but we now know that we can play up here." 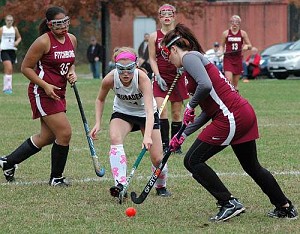