On December 30, the Groton-Dunstable girls basketball team defeated Oakmont 70-29 in their gym and the No. 10 Lady Spartans had to live with that lopsided loss for the rest of the season. Tuesday night was payback for the girls from Ashburnham who atoned for that early season dismantling with a spirited 51-42 win over No. 7 Groton-Dunstable in a first round 2012 MIAA Girls Basketball Central Division 2 game.

"The girls were embarrassed," said Oakmont coach Jeff O'Neil. "We knew we were a better team than we showed. They came in tonight with something to prove."

From the opening tap, Oakmont was ready, playing physical, in-your-face basketball. Their intensity did not seemed to be matched by GD. "When you win by 41points there could be complacency," remarked coach Mark Hennelly.

The Crusaders, who were never out of the game, trailed 22-20 at the half.

A Rachel McCarron (18 pts.6 rebs.) break a way and finish early in the fourth got GD within two again, 37-35, and when Erika Eipp (6 pts.) made one of two from the line you hoped the girls would take control.

A Carley LaMalva (2 pts. 7 rebs.) layup had the locals within one, 43-42 and you said, now is the time, but it was the Oakmont five that responded with an 8-0 run and that was that!

"We were out-worked, missed easy shots," stated a puzzled coach Hennelly. "They out rebounded us and executed better than we did. Credit coach O'Neil because they came in more intense than we did."

The Spartans meet No.2 Nashoba Regional (18-2) on Friday, March 2 in a quarter-final game. 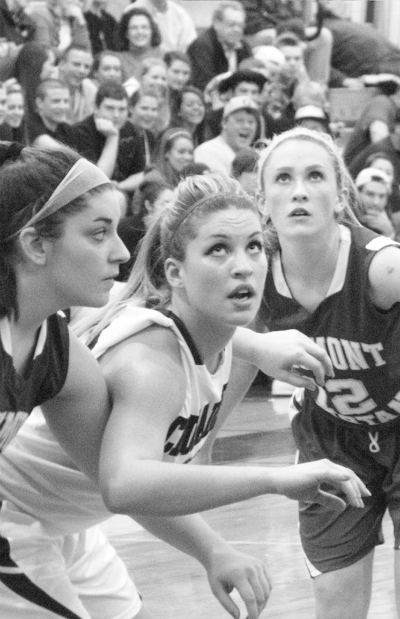