The Groton Pool and Golf Center swim team, affectionately called the Gators, swam to an impressive 387-112 win over visiting Shirley.

"Overall, the kids put in a dominating performance, which makes us very excited in anticipation of what the rest of the season might bring," gushed GPGC head swim coach Jen Dimino.

"Five of the nine athletes who will be representing our team, Groton and all of New England at AAU Nationals in Michigan on July 26th, participated in Saturday's competition," smiled Dimino.  They include Declan Lowney, Alexandra Sinnery, Tad Schiebe, Jordan Sheffield, and Sarah Figueroa.

Carol Wright, owner and director of Swim Pro Aquatics, founded the recreational swim team in Groton in 1995. The Gators have a well-rounded and successful training program and recently earned the distinction of being the first swim team to join ranks with the AAU in New England.

Wright is a Five Star Instructor Trainer for both Lifeguarding and Swim School who periodically travels around the world conducting Instructor Development Courses for SAI.

Dimino, who has coached at GPGC since 1999, is a graduate of Bowdoin College where she was an active member of the swim team. 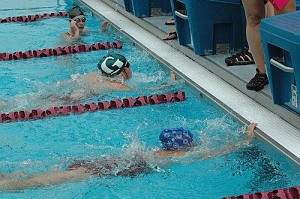