Worcester senior netminder Joseph McCarthy did everything he could, keeping his team in the game but No. 1 Groton-Dunstable was relentless, finally scoring three third period goals to break a 1-1 tie and defeat the No. 2 seeded Wildcats 4-1 at the DCU Center in Worcester. The MIAA Central Mass. Division 3A Champion Crusaders (20-0-1) move on to the State Finals against South Hadley (22-0-1) in Springfield on Thursday, March15.

The teams tied 4-4 earlier in the season and this match-up looked to be a tough challenge if the Crusaders were to advance.

The Crusaders came out flying, outplaying and outshooting the Wildcats 13-5 in the first period, rarely allowing them out of their end. But Joe McCarthy proved to be equal to the challenge. "I mean, he (McCarthy, 31 saves) played out of his mind," G-D coach Brian Payne went on after the Crusaders finally broke through in the third to snap the deadlock. "For a young man to play like that in a pressure situation,was exceptional."

The Crusaders finally beat McCarthy on senior Sean Mahoney's (Assists: Mike Noeth, Mike Keating) goal at 10:32 into the first but the lead was short-lived when Worcester's Nick Herlihy answered at 11:24 to make it 1-1.

The second stanza was scoreless with McCarthy stoned C.J. Kenny and Brad Zadrozny from point-blank GD netminder Jason Robes faced 13 shots making 12 saves. "Robes made some big stops for us," said Payne. "I knew if we kept working, things would work for us."

In the third, the unassuming Mahoney, with assists from Mike Kerwin and Brendan Hunter, netted his second goal of the game, wristing a shot inside the right post with 7:32 remaining.

"That was the biggest game of my life," enthused Mahoney. "We were playing hard but just could not finish. But we have three solid lines and just kept going at them."

Worcester had won five games last year, but turned it around, going 17-4-1, with much credit going to one of the better goalies in Central Mass. The team recorded the program's first postseason victory in its 17th season.

"Our first goal was to make the playoffs and the second, to make the final and now we have accomplished that," said Payne. 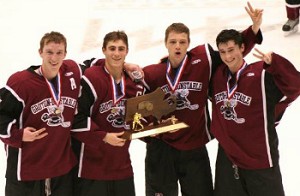