Groton-Dunstable's Matt Manning hauled in a screen pass from Mark Eberhardt in overtime and scored a seven yard TD and when junior Quintin Forbes ran in the two point conversion, Crusaders  (8-1, 4-0) squeezed by visiting Gardner 29-27.

In the HS overtime format, each team gets the ball on the 10 and has four plays to score a TD. After the Crusaders touchdown and two-point conversion, Gardner, down 29-21, got a seven-yard touchdown from Brandon Williams. Wildcats' senior QB Andrew Guay hit classmate Ken Correa on the conversion attempt but he was stopped on the one yard line and that was that! Can't remember a more exciting, drama-packed football game.

Considering the Wildcats (3-5) had 306 total yards of offense to 180 for GD, you had to wonder how the Crusaders escaped with the win. "Well, we made the big plays when we needed them," said head coach Derek Asadoorian.

Teams exchanged the lead in the first half with GD scoring on Manning's TD run from seven yard line in the first quarter. The PAT was good by Cory Romich. Andrew Guay tallied Gardner's score on a 26 yard run with Peter Gallant kicking the extra point.

Andrew Gallant snared a 22-yard pass from Guay (Peter Gallant kick) to give Wildcats a 14-7 advantage with 2:02 left in the second quarter.

"We have time to score," shouted GD assistant Phil Unger. Crusaders answered. The big play, a 45 yard Eberhardt to Drew Moore pass completion setting up Manning who swept left end and in for his second TD. Romich's kick was good knotting the game at 14-14. Unlikely, considering Gardner had ball possession much of the half with 23 rushes for 84 yards and Andy Guay was five for ten passing for 84 yards.

But Crusader defense came up big when they had to with Manning getting 13 of this 27 tackles in the first half, Matt Plausse and Andrew Dhionis adding five and seven tackles respectively over the same time.

"They gave us all we could handle," continued Asadoorian. Wildcats controlled much of the third quarter with Brandon Williams scoring the go-ahead TD from the two (Peter Gallant PAT).

With 6:22 remaining in regulation, Mack Eberhardt, following Manning and Sam Yeadon, raced in to the end zone from the 11-yard line to tie the game at 21-21 (Corey Romich PAT).

"That was our first overtime win ever," Asadoorian said. "They are an excellent program, well-coached and they controlled the game."

Time of possession heavily favored Gardner but Crusaders found a way, making defensive plays when they needed them.

Manning had a huge day for Crusaders with 17 carries for 103 yards and three TDs. Eberhardt ran for 91 yards and a TD on 13 rushes and completed 7-of-9 passes for 105 yards. Ben Lutkevich (six tackles) and Joey Orlando (eight) were also defensive standouts.

Crusaders travel to Lunenburg Friday, Nov. 9 for a critical league game. A win would set up a contest against Tyngsborough for first place Thanksgiving Day. 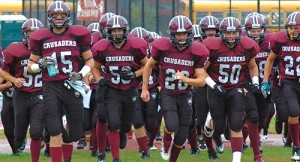