It was not easy, but Groton-Dunstable (9-1-1) squeaked past Westfield/Westfield Tech, 2-1 in a high energy, physical hockey game Monday night at Groton School. Senior Brad Zadrozny lit the lamp on both scores including the winner, a power play goal at 8:44 of the third period.

Both the Crusaders and Bombers (9-1) are big, physical, skilled teams that skate well and play the body. Only one penalty was called in the opening period (Westfield), but both teams made up for it with 12 each over final 30 minutes.  "It got a bit 'chirpy' out there, especially in the third," Rowley said. "We work very hard at walking away from altercations, but....it was a physical game!"

After a scoreless first period that saw GD outshoot Westfield 13-6, the Bombers' Chris Gentile broke past Crusaders' defense but Jason Robes (19 saves) in net for GD, made the stop to keep the game scoreless.

With Crusaders on a power play in the second stanza, Sean Spohr (Assist: Nick Liberto) slid the puck past Robes, scoring a short-handed goal at 7:43 to push the visitors ahead 1-0.

But these Crusaders can skate! At 12:56, Derek March gathered a pass coming through the neutral zone, carried it deep into the corner then fed it to Justin Cole whosent a perfect to Zadrozny who tipped it past Liberto.

For the rest of the period and much of the third, play was physical with retaliation and equal time in the penalty box, and penalty killing on both sides. "I don't like this kind of play," said a less than pleased assistant coach Jeff March.

In the third and GD on a power play, senior center Adam Kmetz took the face-off to the right of Westfield goalie Nick Liberto. Kmetz won the draw to Zadrozny who finished, beating Liberto to his glove side at 8:44 and that was that!

"The defense played so well, Mike (Keating), Allan (Haynes) and the play Brad Garside made diving in front of the puck. "I think we are capable of skating with anyone in the state," concluded Rowley.

The good holiday weekend for the Crusaders started with their 5-0 shutout of Algonquin (4-4-1, 3-1) to take over sole possession of the Roy Conference. Against the Tomahawks, JJ Tardiff, Josh Rabbitt, Bradley Garside, Mike Keating and CJ Kenny all scored. Jack Niemoller made 11 saves for the shutout.

"The game was not as easy as the score would indicate. A couple of good breaks and a puck that bounced over their goalie's head," said Jeff March. "They (Algonqin) are a good team." 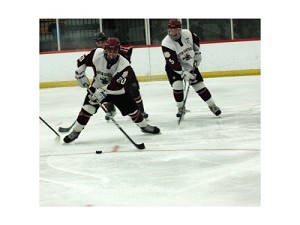