Students at all grade levels in Groton Dunstable Regional School District continue to score significantly above the state average on MCAS Tests administered in 2012. According to information presented to the School Committee at their Oct. 10 meeting, approximately 80 percent of all students at the elementary, middle school and high school level scored "proficient or advanced" on MCAS test in 2012. This compares to 60 percent of students statewide who scored proficient or advanced.

The MCAS Test is given annually to all students in public schools in Massachusetts and, in essence, tries to measure a student's competence and performance in the subject areas of English, math and science. At the elementary level, students are tested in English and math and at the middle school and high school level, students are tested in English, math and science.

Sandards for MCAS testing will undergo some change in the coming several years in terms of what will be tested and the overall goal and purpose of the test. The MCAS Test had been used to measure a student's competence and knowledge in different subject areas especially English and math. The test was also an indicator of how well school districts perform in teaching those subject areas. Under the old federal legislation of "No Child Left Behind," 100 percent of students had to score proficient or advanced on the MCAS Test by 2014. That goal has been scrapped by a new, amended version of "No Child Left Behind" legislation. The new goal is to reduce by half the number of students who score at the "needs improvement" and failing level. 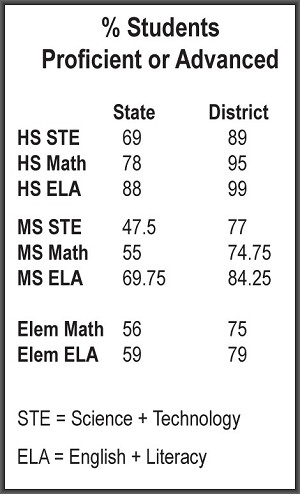