The Groton-Dunstable Robotics Team (also known as "The Robotomies") are working anxiously as they prepare for the annual FIRST Robotics New England Regional Competition. Founded in 1989, FIRST (For Inspiration and Recognition of Science and Technology) has given students across the nation accessible programs that promote curiosity and provide career opportunities outside of the classroom.

The FIRST Robotics Competition boasts a unique challenge every year in which they push competitors to get creative in their problem-solving techniques. This year's challenge, Aerial Assist, pits robots against each other as they attempt to pass a large, 2-foot wide exercise ball around the field and score it in the opposing team's goal.

The Robotoimes are in the process of fine tuning the specific designs of the catching, shooting, and passing components of their robot. With many different ideas in play, team members are working hard to prototype and experiment so that the most effective ideas will arise and bring the team to victory.

The Groton-Dunstable Robotics Program has been a part of FIRST for 12 years. An experienced team, the Robotomies have had their share of ups and downs through the seasons. Recently, the team has seen an upward trend in their performance.

Last year, the Robotomies made it all the way to the semifinals, where they were barely eliminated in a tense match. In addition, they also received the Innovation in Control Award presented by Rockwell, which recognized the robot for its ingenious design and successful mechanics. Riding the momentum into this year's challenge, The Robotomies hope to top last year's performance with an even better showing and move on to the national competition.

The Robotomies will be competing at the FIRST Granite State District Event in Nashua, NH, from February 28th to March 1st and at the FIRST WPI District Event in Worcester from March 13-14. The matches will be open to the public, and they will be a fierce clash of engineering brilliance that you won't want to miss. Come support the team as they look to take home the gold in this year's Aerial Assist!

Check out www.team1277.org for latest information on our progress. We would like to thank our sponsors: Mercury Systems; the Justin J. Maynard Memorial STEM Innovation Scholarship; National Defense Education Program; the Society for Military Engineers; Raytheon; and the Ted and Connie Lapres Fund at the Community for North Central Massachusetts Foundation. 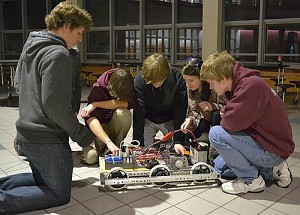