Those few seconds brought the two women together under tragic circumstances and, ironically, led them to the same organization whose goal is to educate not only young drivers but also parents and teachers about the dangers of distracted drivers. That organization - the Casey Feldman Foundation - was also born out of tragedy involving death and distracted driving. The teenage driver from Groton-Dunstable learned of the Casey Feldman Foundation and began to participate and volunteer in their educational efforts. Through her involvement, the Foundation reached out to Emily to invite her to participate in their program.

Emily agreed to become involved but wanted to do it by herself and not in conjunction with the other woman. The two have never personally met and the only contact since the accident was during the trial and an exchange of letters. Emily stated this week after a presentation at the high school that she is not ready nor desires to meet with the driver involved in the accident. Her wishes have been honored by the Casey Feldman Foundation and Emily appeared at a program on distracted drivers held at the high school this past Tuesday mornning. The other woman did not appear but she volunteers and participates in other presentations hosted by the Foundation.

Feldman was present at the program this past Tuesday and led a lively presentation with students on why drivers become distracted and how dangerous consequences can result from those distractions. Part of the program included public service videos produced by the Casey Feldman Foundation. One video featured the comments of Emily and her feelings about the loss of her father and the role that distracted driving played in that tragedy. Emily addressed students a couple times during the program and urged them to be cognizant of distracted driving by playing "What if" type games where a person imagines what outcomes would occur if different circumstances were in play.

Feldman emphasized during the program that parents are worse than students when it comes to distracted driving involving behavior on mobile devices - cell phone, gps, etc., eating, daydreaming or becoming animated when a favorite song is played on the car radio. Feldman summed up the program by noting, "When we drive distracted and arrive safely at a destination, it is luck." 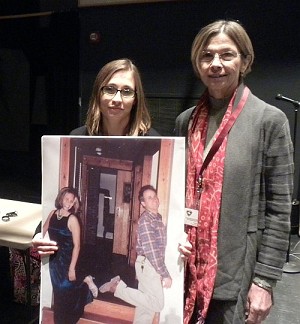