Tessa David of Groton has been awarded top honors at MassRecycle's 17th Annual Recycling Awards ceremony held Nov. 13, at the InterContinental Boston, She was named Recycler of the Year and received the People's Choice Award.

"I was surprised (and a little embarrassed) to find I was the only one to wear an upcycled outfit. I usually wear GrotonFreeStuff or the Give-and-Take recycled outfits to recycling functions. I decided to get past my shyness and model my dress when I learned that I won two awards and walked up to accept them," she said.

Upon learning of awards, one of her friends sent Tessa a picture of Jennifer Lopez in a puffed sleeve dress made out of garbage bags. This was two days before the ceremony where they would announce the winners.

"I took it as a challenge and decided the day before that I just had to make something to wear. Because I had so little time to design and make the dress I decided to upcycle and add to a basic sheath dress. This is a new term for recycling something differently than intended. My problem was that I had very few of the bags that I wanted to use and it was tricky not melting them because they are so thin. AND my cat was no help laying on the plastic "fabric" as I measured it for cutting.  I also had to trade some other colored bags with a neighbor. I seam-sealed with an iron and parchment paper 12 flattened bags to make the bottom of the dress and then sewed it to the waist of the dress.

The neck is plastic bags folded, stitched, gathered and then applied by zigzagging stitching them to give them a flower-look. Thank goodness I decided I didn't have time to make the bodice because I finished the dress just before leaving for Boston and I would have been too hot! As it was, I hadn't been able to test the dress for sitting and grabbed a roll of tape for repairs!"

Tessa emphasized that MassDEP has found through waste audits that about six percent of the waste (not what's already recycled) is textiles that can be used again for many purposes including re-worn, cut into wiping cloths or shredded into filler for stuffed animals or upholstery.

Residents can put the Good, Bad and Ugly into the textile bins at Groton Recycling Center and Transfer Station. Items can be worn, torn, missing zippers and buttons; it will all be recycled. It just cannot be wet or contain hazardous waste.

Tessa serves as Chairman of Groton Recycling Committee, Chairman of Hazardous Waste Day at Devens, and runs her own business MassToss. She also received an award in 2011 for Most Innovative Program -GrotonFreeStuff.

In addition, Tessa was instrumental in writing the grant that resulted in Groton Regional Recycling Facility.

Groton DPW Director Tom Delaney praised Tessa saying, "She has contributed enormously to the success of our recycling program and to those of surrounding towns. She is always available to consult on issues and find resolutions. Tessa is a huge asset to Groton and her awards are well-deserved." 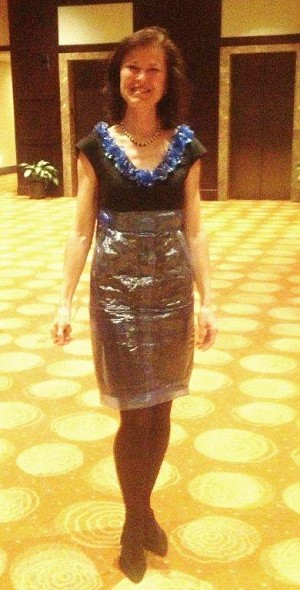