Three Groton residents, senior Jake Riggert, staff member Peter Fredriksen, and teacher Jerry Wooding, were among individuals recognized for service to Lawrence Academy at school's 20th Founders' Day Oct. 26. Head of School Dan Scheibe noted that the school's long history-it was founded in 1793-is celebrated at this event by bringing people together "that embody the mission of the school."

Jake Riggert was selected by members of school's Cum Laude Society to receive the Greater Good Award. In a tradition started by J. Dunn '83 and his family in 2005, the award is given each fall to an LA student and each spring to an LA graduate to recognize LA citizens who use their education to make the world a better place. Cum Laude Society member Holly Moniz, also from Groton, who presented the award, described Jake as someone whose "many contributions fly under the radar, but who always helps out whenever he sees an opportunity." An LA tour guide and peer counselor, he began his long history of service to community in elementary school. To name just a few of his efforts, he has run food drives for Loaves & Fishes, collected gifts for Toys for Tots, and washed the town's EMS ambulances. When Japan was reeling from the 2011 tsunami, he helped raise funds and opened his own home to two students who were temporarily unable to return to their families there. Jake supported Groton-Dunstable middle school's Big Book: Pages for Peace project, an effort that began when he was a student there. Ms. Moniz presented the award saying: "Thanks for all that you do to make the world a better place."

Peter Fredriksen reached the milestone 25 years of service to Lawrence Academy this year, and was acknowledge for his dedication as the school's housekeeping supervisor.

Jerry Wooding was one of three faculty members selected to share the 2012 Founders' Day Award for Service to Lawrence Academy. Along with Joe Sheppard of Pepperell and Peter Hazzard of Rindge, NH, Jerry was recognized for his many contributions during his long years of service to the school. 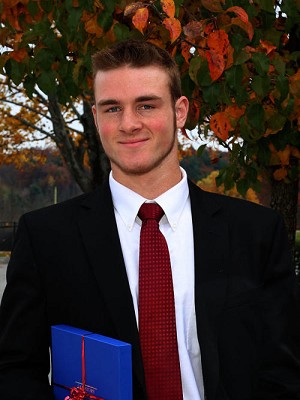