Today more than 60 percent of Lost Lake surface and 100 percent of the shore line are covered with invasive weeds including cabomba, two types of milfoil and an algae type weed. Degen pointed out this infestation makes the lakes dangerous for all types of recreation, especially swimming.

The article before voters requested and received approval for expenditure of $95K for application of an herbicide called Sonar to eradicate the weeds. This is the cost for the initial application and several follow up spot applications.

Degen stressed that the reason that the article was on the Special Town Meeting warrant for action is because the Sonar application needs to start in early spring in order to be effective, making an Annual Town Meeting approval too late in the season. The article passed by a 2/3 majority.

Groton Lakes Association President Art Prest pointed out that in addition to the dangerous situation for recreation, home values of lake property is significantly reduced because of this, although these properties pay increased real estate assessments for the lake frontage.

Prest provided a history of efforts of the Lake Association to address the growing weed problem, which today is the greatest since their efforts started.

These included hydro raking, hand-pulling, deep drawdown, carpet barriers, a herbicide application in the 2002/2004 time period that was stopped because of an endangered weed that later proved not to be in the lake, a weed harvester that sheered the tops of the weeds but regrowth was too fast, weevils and grass eating carp proved to be too expensive, and dredging the lake estimated to cost in the $14M range.

He stressed that Sonar has been successfully used in lakes in 23 towns in Massachusetts and is completely harmless. It is approved by the Environmental Protection Agency and the Commonwealth of Mass. since 1986. This project received unanimous support from all the relevant town boards and, in particular, Conservation Commission and Board of Health.

Groton resident Savos Danos, who is General Manager of Littleton Light and Water Departments, and an expert on clean lakes, told voters that Littleton has been doing whole lake treatment for close to 10 years. "There has been no impact from the herbicide on the public water supply," he said.

In a move that surprised Selectmen and the Lakes Association, Water Commissioner Gary Hoglund reported that his board did not support this article because of their concern for the town's Whitney well. "There is a lack of clarity of the amount of treatment needed and it may be targeting weeds for the good of recreation but weeds clear phosphates...If you approve this, the water quality needs to be tested prior to application."

Danos told voters that in 2004 Littleton received a grant for Spectacle Pond. "We created a 2-D model and have empirical data on ground water dynamics. What you have [just] heard as a concern is not one. We were never contacted in Littleton (by the Groton Water Commissioners). There is no scientific basis that weeds help the lake. Don't be hoodwinked by this." He said to Hoglund, "As Water Commissioners, you should know better."

Hoglund pointed out that Spectacle Pond has a "high flow rate" and that every body of water is different. "We represent the water ratepayers not the taxpayers and we see no upside to this."

Prest said, "We have been blindsided by these statements. We received no comments directly from the Water Commissioners. This is proved to have non-toxic results...Sonar is the safest herbicide that you can use. I am disturbed that this popped up at the last minute."

Degen added, "This has been on the table for months. The Water Commissioner is using scare tactics." He added that a recently passed government regulation will, in the near future, require towns to install a decontamination system to clean boats, both on entering and leaving the lakes to prevent re-introduction of invasive aquatic plants. 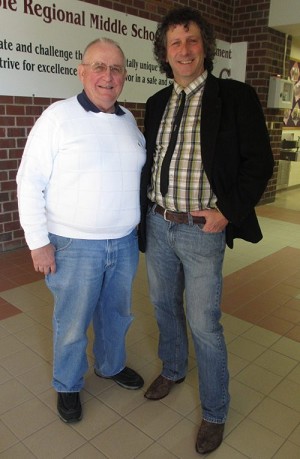