On Saturday and Sunday more than 200 Groton residents banded together to help raise the structural bents for local proprietor Peter Benedict's post and beam barn on Main St. The barn will be workshop to Benedict's custom furniture making business, where he will be making 18th Century American-style furniture. The post and beam construction (as opposed to the more common stick framing) moved one giant step closer to completion. The group effort was much needed and much appreciated, given the fact that each bent weighed approximately 1500 lbs.

Backdrop for this unusual event was a landscape of rolling hills popped with bulb-like trees at the peak of their ephemeral foliage. Smiles were on the faces of the assembled neighbors. The irresistible smell of the catered pig roast rose to the nose. Raising the barn's skeletal frame was reminiscent of a scene from the 1985 film Witness in which an Amish community utilizes similar techniques to raise a barn as Peter and his workers used on Sunday. A gin pole and pulley, block and tackle, and a lot of manual labor were required to raise the foundation.

On Monday, Benedict reflected, "It was really a fantastic and warm feeling to see all the help from the community... People showed up and worked really hard. I appreciate everyone who put in the time to help. It was heartwarming. There were 75 people at a time helping, and there was risk involved too, along with heavy lifting. I'm proud to be a part of this community. I want to give a big thank you to everyone who helped out." The project has solidified Peter and his family's feeling that Groton is truly home.

The busy weekend was, however, at times stressful for Benedict, but it successfully culminated four months of hard work put in by himself and his core group of assistants Mike Brown, Caleb Kimpton, and Matt McCracken, work that saw the transition from summer's swelter to fall's foliage.

Now, it's a race against the New England seasons. Peter hopes to enclose the barn by the dawn of winter, and ideally, to start selling furniture in the springtime for the first time since moving to Groton from Natick four years ago. To enclose the barn requires finishing the roof, walls and windows. This will allow Peter to work on the interior throughout the cold weather. The temperamental nature of our seasons makes it hard to say how easy this goal will be to accomplish.

Upon completion of the barn, Peter also plans on teaching woodworking classes inside the aesthetically pleasing, rustic workshop. His website, benedictfurniture.com, will be the vehicle through which to order furniture, or to sign up for woodworking workshops. 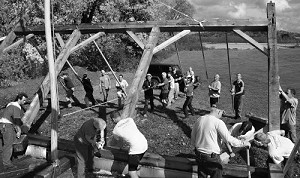