On May 9, 2012 at 4:10 a.m., Groton Police Officers Kevin Henehan and Nicholas Beltz responded to a report of a fight in progress at a residence at 1 Old Lantern Lane. When they arrived, it was quiet, but when they went to check on the well-being of the residents they discovered a bloody scene as a result of a fight inside the residence.

During the initial inquiry, the officers discovered what appeared to be a large quantity of Marijuana, made an arrest and secured the scene. A tenant at the residence, Joseph Medeiros, was taken into custody and charged with disturbing the peace, possession of a Class D drug with intent to distribute and possession of Marijuana.

According to Chief Donald Palma, this included approximately 23 pounds of Marijuana, 16 glass pipes, 96 Oxycontin pills, about 307 steroid pills, 50 bottles of liquid steroids, more than $13K in currency and 9mm ammunition. The Chief said that although ammunition was found, no gun was located at the site.

He praised his officers for working for 15 hours above their regular shift and for the 4 days to process the cache. "It was a week-long process from the search warrant to the completion of the assessment evidence found at the home and the subsequent investigation," he said. Following the results of the search of the home, the charges were upgraded to reflect the amount of evidence collected by the officers.

On Tuesday, January 15, the case was processed through the legal system and Joseph Medeiros was found guilty and sentenced to the Middlesex House of Correction. 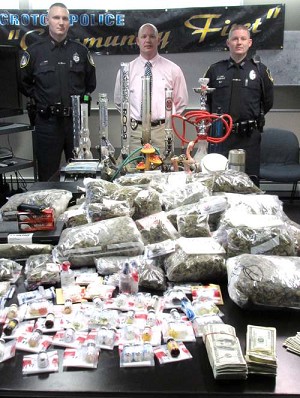